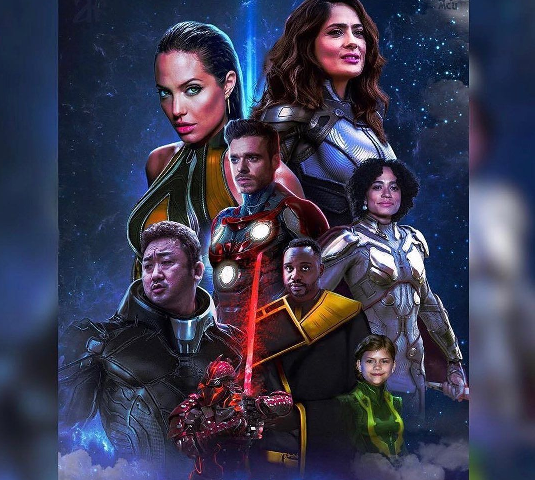 IMDB has removed the negative reviews while Rotton Tomatoes has banned anyone from “reviewing” a movie that hasn’t come out yet.

Marvel’s newest entry into the cinematic universe, Eternals, comes out later this week, but “review-bombers” are already at work trying to tank the film’s reputation.

They haven’t actually seen the flick, which comes out on November 5. Instead, they’re upset that it includes the first out gay couple – the superhero Phastos and his husband Ben.

Describing the movie as “woke and mediocre” or worse, the fake reviewers trashed the film on IMBD, spurring the site to remove all the negative reviews flooding the page. Rotten Tomatoes, the other popular movie ratings site, does not allow users to review movies or games that have yet to be released. Previous trolling campaigns spurred the policy.

Gay actor Haaz Sleiman will play the husband of Phastos, the first gay superhero to appear in a Marvel Studio film. Phastos is played by Brian Tyree Henry, and the couple will also have a child.

At the film’s Hollywood premiere, Sleiman shared his pride in being part of this historic movie.

“It’s lifesaving,” Sleiman said in an interview with Variety. “I wish I had that when I was a kid growing up to see this. My God, I wish. Can you imagine how many lives this is going to be saving? Kids, young queer folks who are either being bullied, committing suicide, not seeing themselves represented and now they get to see this. It’s above and beyond.”

Sleiman also praised the fact that both men in the couple are people of color.

“That is so huge. Marvel and Disney could not be any more global.”

The film may mark the first of several queer on-screen representations Marvel fans can expect in the near future.

In the upcoming film Thor: Love and Thunder — the fourth film installment of the Norse-inspired series due out in November — out actress Tessa Thompson will play Marvel’s first explicitly LGBTQ character reprising her role as Valkyrie, a former slave-trader now seeking a queen to rule at her side in New Asgard.

In August 2019, Marvel also put out a casting call for a “transwoman actress of any ethnicity in her 20s to 30s,” leaving fans to wonder which film the trans actress might appear in.