Call them the new ‘Golden Girls’ 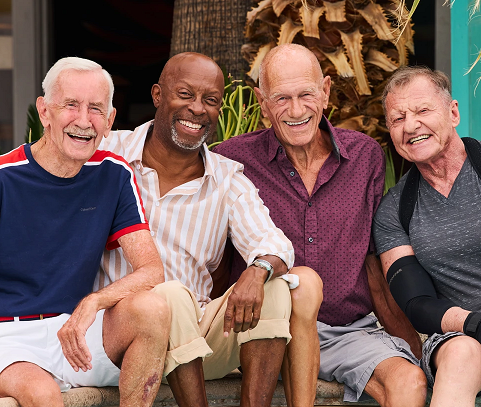 The Old Gays just landed their own series.

Anyone smitten with the popular TikTok gang “The Old Gays” rejoice: the geriatric foursome have just landed their own TV series.

“We are thrilled to be working with the hilarious and very talented ‘Old Gays,’” BGM CEO Brian Graden said in a statement. “Their videos resonate with audiences young and old alike and viewers have shown extreme interest in seeing their lives on a more personal level which we intend to deliver upon.”

At present, the Old Gays have more than 3 million followers on TikTok. The group first rose to infamy as spokesmen for the popular gay dating app Grindr. They’ve since developed a loyal following for their mix of humor and warmth, as well as their anecdotes from LGBTQ history.

“I think the most important thing that we’re educating people on is that 60 years ago, coming out was a real struggle,” Bill Lyons told NBC during Pride Month 2021. “You didn’t talk about coming out to your parents or anything. In fact, a lot of situations, I heard when parents found out that one of their children was gay, they kicked him out of the house right away. It really wasn’t easy in the beginning.”

“I have not always had a voice,” Jessay Martin added. “This has given me an opportunity to really use my voice and to just not to worry about what people are thinking of me. For me, it really has been and still is quite the journey. I don’t know where it’s going, but right now I’m on cloud nine and I’m thankful to be a part of it.”

No word on when the show will premiere, or which network or streaming service will air it.