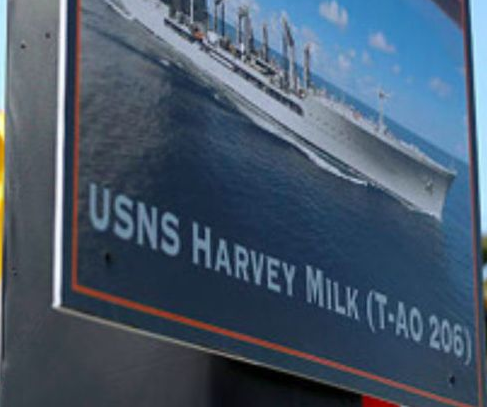 The new vessel was launched in San Diego Bay Saturday, according to the AP. The ship ceremoniously entered the water after a bottle of champagne was smashed on the bow by former Navy officer Paula M. Neira, clinical program director for the John Hopkins Center for Transgender Health. Navy Secretary Carlos Del Toro and Milk’s nephew, Stuart, attended the event.

“The secretary of the Navy needed to be here today, not just to amend the wrongs of the past, but to give inspiration to all of our LGBTQ community leaders who served in the Navy, in uniform today and in the civilian workforce as well too, and to tell them that we’re committed to them in the future,” Del Toro said, according to the AP.

Harvey Milk served four years in the Navy before he was forced to leave because of his homosexuality.

“For far too long, sailors like Lt. Milk were forced into the shadows or, worse yet, forced out of our beloved Navy,” Del Toro said, according to the AP. “That injustice is part of our Navy history, but so is the perseverance of all who continue to serve in the face of injustice.”

The new Navy vessel is one of six new ships named after famous civil rights leaders. Among the other honored pioneers are former U.S. Attorney General Robert F. Kennedy and former Chief Justice of the Supreme Court Earl Warren.

Milk was a Lieutenant in the Navy and was a diving officer, according to BBC. He served aboard the USS Kittiwake, a submarine rescue ship, during the Korean War. He was caught in a park that was popular with gay men at the time and it raised questions about his sexual orientation, according to the Washington Post. After being questioned about his sexuality, Milk resigned from the Navy. He was given an “other than honorable” discharge on Feb. 7, 1955. He would have otherwise faced a court-martial because of his homosexuality, according to Bay Area Reporter.

Nearly two decades later, Milk was elected to the San Francisco Board of Supervisors in 1977, becoming one of the country’s first openly gay politicians, BBC reported. He was tragically killed in 1978 by Dan White, a rival politician.