LGBTQ Institute in Germany Was Burned Down by Nazis 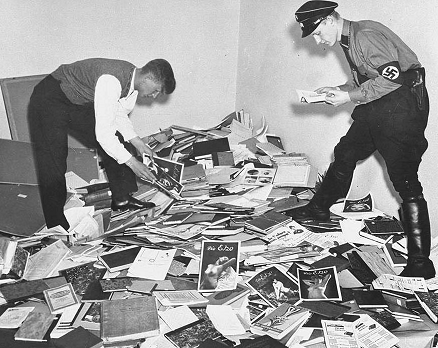 The resources and data at Institut für Sexualwissenschaft were never replaced.

On January 30, 1933, Adolf Hitler was officially appointed chancellor of Germany. His rise to power ushered in Nazi control of the country and led to the horrors of the Holocaust. Among those targeted by the Third Reich were lesbian, gay, bisexual, transgender, and queer people. LGBTQ people would be sent to concentration camps alongside Jews, the disabled, and many more — but one of the Nazis’s first shows of force against Germany’s LGBTQ community was an attack on information.

On May 6, 1933, Nazi demonstrators raided the libraries of the Institut für Sexualwissenschaft, a German name that roughly translates to the Institute of Sexology. The Institute was a privately operated research space for studies of human sexuality. More than 20,000 books were taken from shelves and burned days later in the streets by Nazi youth groups.

It was a devastating blow to the life’s work of Magnus Hirschfeld, the institute’s founder. Hirschfeld, who was Jewish and gay, was a pioneer for rights and liberation in Berlin’s thriving LGBTQ community. He founded the institute in 1919, after beginning his career as an activist in 1896 with his pamphlet Sappho and Socrates, about a gay man who took his own life after he felt he was being coerced into a straight marriage.

Hirschfeld’s early publications laid the groundwork for his profile to rise until he became one of the most prominent LGBTQ activists in the world. He even cowrote one of the first gay characters to appear in a film, for 1919’s Different From the Others.