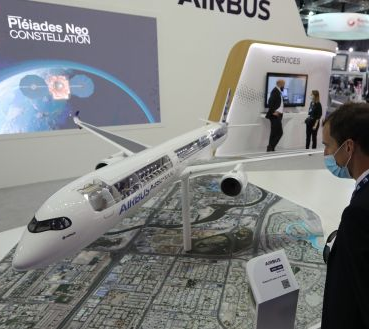 Airbus notched a mega-order for 255 narrow-body jets at the Dubai Airshow, bolstering the European planemaker’s case that aircraft demand has started to roar back from the lows of the coronavirus pandemic.

The deal for Airbus’s larger A321 model is valued at more than $30 billion (€26 billion) before typical industry discounts. It will be parcelled out among Wizz Air Holdings, Frontier Group Holdings and two other low-cost carriers that count Bill Franke’s Indigo Partners as their top shareholder, the companies said Sunday.

Airbus is trying to persuade suppliers to prepare for an acceleration of narrow-body output past pre-Covid 19 levels over the next few years. Yet orders so far in 2021 have been dismal, trailing rival Boeing by two-thirds. The Indigo deal is baked into the planned ramp-up, the European planemaker’s chief executive, Guillaume Faury, said at the signing ceremony in Dubai.

“It’s a great pleasure to be back on the front foot and looking to the future after the Covid crisis,” Mr Faury said.

Airbus is also in talks with Air Lease for a major order that would include a mix of narrow- and wide-bodies, Bloomberg reported.

Demonstrating sustained demand is a key part of Airbus’s mission in Dubai. It issued a market forecast on Saturday showing little change in the 20-year outlook from before the pandemic. It’s counting on demand for cleaner jets to drive earlier replacements than it assumed prior to 2019.

The majority of the Indigo-ordered plans to be made in Mobile, Alabama, Airbus said.