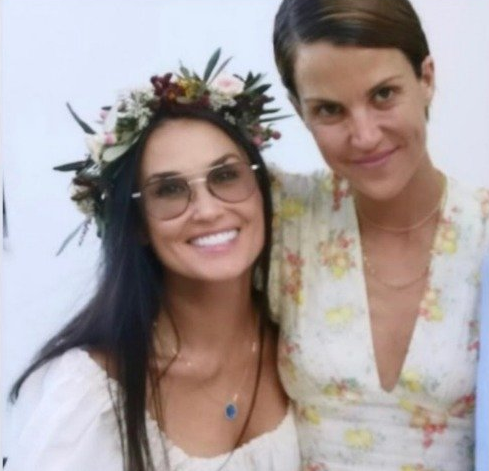 The rumors started to fly after the possible girlfriend posted a couple of photos of Moore on Instagram for the actor’s birthday.

The internet has started to lose it over rumors that actor Demi Moore has been in a relationship with Serbian stylist Masha Mandzuka for the past 9 years.

On Instagram last week Manndzuka posted a photo for Moore’s 59th birthday. She wrote, “Happy Birthday to you, beautiful angel [Demi Moore]. So grateful for 9 years of you!!!”

Mandzuka ended the post with a baby, a heart, a rainbow, and a prayer emoji.

Twitters users questioned whether she had outed her and Moore’s relationship.

Dollard then tweeted, “the power Elvira has,” in reference to Cassandra Peterson, who plays Elvira, Mistress of the Dark. Peterson came out in early October with news that she had been dating a woman for 19 years.

Rumors about Moore’s potential relationship with Mandzuka erupted first in 2019. Gossip site Radar reported that Moore was dating Mandzuka and they were raising a child together.

“In their private moments, Demi and Masha are very intimate with each other,” an unnamed source told the outlet at the time. “They hold hands, and Demi is like a second mom to Masha’s baby.”

The outlet said the two are frequently seen together around Hollywood. The two even spent Christmas together with Moore’s ex-husband Bruce Willis and their children.

Radar reported that a Serbian website claimed Moore visited Mandzuka in Belgrade in 2017. “Belgrade is a city where we all know each other — everybody has written about their relationship!” journalist Aleksandar Markovic told Radar.