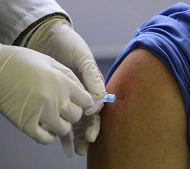 People living with HIV could be at long last “liberated” from a “burdensome” daily pill regimen, as a new long-lasting injectable is approved for use in Britain.

In news dubbed “brilliant” by a leading HIV activist, the NHS has been given the go-ahead to roll out injections taken every two months to manage the virus.

Currently, people living with HIV are offered antiretroviral medicines that must be taken every day to suppress the virus – usually one to four daily pills. Effective treatment reduces a person’s viral load – the amount of virus in their blood – to an undetectable level.

When the virus is undetectable, it cannot be transmitted, and a person with HIV can live a long, healthy life.

The new treatment approved by England and Wales’ National Institute for Health and Care Excellence (NICE) and the Scottish Medicines Consortium on Thursday (18 November) is a combination of two jabs taken every two months.

Around 13,000 people will be eligible in England, NICE estimated.

HIV jabs will do away with the ’emotional burden’ of daily pills, says leading activist

Many people struggle to take the tablets they need to keep HIV at bay, Matthew Hodson, executive director of HIV outreach charity NAM aidsmap, told PinkNews. The stigma around HIV can discourage people, while others may simply forget.

But missing pills can have drastic consequences because it allows the virus to build up resistance to such treatments and multiply rapidly.

“Taking daily pills becomes an emotional burden,” Hodson said, “a constant reminder that their health is at risk without medication.

“For some, who are unable to be open about their need for HIV treatment, it can create considerable obstacles to necessary adherence required for HIV medication to be effective.

“For many, a switch to injections just six times a year will be a liberation.”

HIV works by slipping into the human genome and tricking the machinery of white blood cells into making copies of HIV. As white blood cells are the body’s natural defenders, this weakens people’s immune systems.

The two injectables, cabotegravir and rilpivirine, work by suppressing how many HIV particles are in the blood, their viral load. It makes the viral load so low that the virus cannot be detected or even transmitted between people.

The jabs are just as effective as currently available oral drugs, clinical trial results have shown.

Both medicines have been licensed by the Medicines and Healthcare products Regulatory Agency, which carries out safety checks on drugs that pass clinical trials.

Now that they have been recommended by NICE draft guidance , they can receive crucial funding from local health authorities.

“It is important that HIV treatment continues to adapt and innovate to ensure that as many people as possible can benefit,” Hodson added.

“Effective treatment means we can now enjoy the same life expectancy as those without the virus and we can no longer pass HIV on during sex; getting treatment to all people with HIV in a way that supports our circumstances holds the key to ending this epidemic.”

Hodson said he hopes such innovation can be brought to pre-exposure prophylaxis, or PrEP, the drug which when taken correctly prevents people from acquiring HIV.

“Many of the barriers to effective PrEP use are down to the need for daily pills – or the two-one-one on-demand strategy for cis men who can plan their sexual activity,” he explained.

“Injectables, implants and even very long-lasting pills are all in the pipeline, and these could have a huge impact on our ability to prevent HIV.”

The government estimates that 101,000 Brits currently live with HIV.