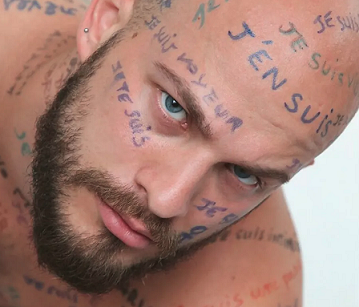 Martin made waves a couple of years ago when he staged an exhibition (“Public Toilets, Private Affairs”) at Berlin’s Schwules Museum dedicated to exploring the history of gay sex in public toilets.

That show generated press attention around the world, and GayCities can exclusively reveal it will come to the Leslie-Lohman Museum in New York in September 2022.

The many faces of Benjamin

Beau Menteur features images of a Paris-based model and performer who goes simply by the name Benjamin.

Through working with one model, who transformed his appearance across several photoshoots, Martin wanted to explore notions of masculinity. For example, what makes one depiction of maleness supposedly more attractive than others? Does simply adding a beard or mustache to a man make him more appealing, and if so, why?

Benjamin adopts different looks along the masculine-feminine spectrum, drawing upon his own experiences when younger as a drag performer. In some images, he’s a ballerina, while in others a boxer.

Perhaps all gender identity is a form of performance … Or as RuPaul famously suggested, “We’re born naked, and the rest is drag.”