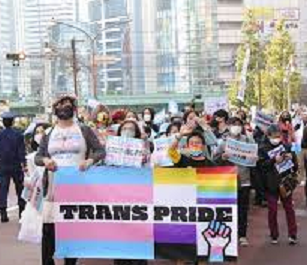 TOKYO — Japan’s first ever trans march was held in Tokyo’s Shinjuku Ward on Nov. 20, and called on people to recognize human rights and dignity for the transgender community.

Some 400 participants marched for about 1.7 kilometers in the area surrounding Shinjuku Station and through high-rise buildings downtown, while holding up trans pride flags of light blue, pink and white, and signs reading “We do not tolerate trans hate” among other messages.

The event was organized by transgender activists Tomoya Asanuma, 32, and Tomato Hatakeno, and was held on the International Transgender Day of Remembrance to honor the memory of trans people whose lives were lost to acts of transphobic violence.

Outside Japan, there have been incidents where trans people, who identify as a gender other than that registered at birth, have been murdered due to transphobia and prejudice. In recent years, online abuse against trans individuals has escalated, and there have been reported cases of discrimination and exclusion upon employment and other occasions in daily life, as well as cases so severe that trans people are driven to take their own lives.

After participants gathered at Shinjuku Chuo Park, the march’s starting point, Asanuma gave a speech ahead of the parade, saying, “We all live side by side. I hope that we can have a society where trans people can also live comfortably.”