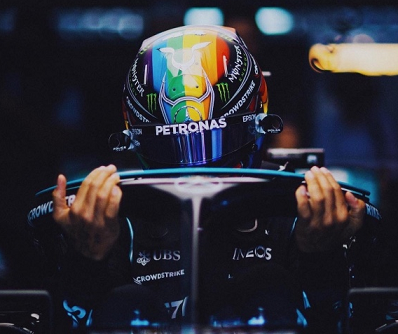 Formula One race car driver Lewis Hamilton, took a public stand for  LGBTQI rights in Qatar. Hamilton wore a helmet embossed with the Progress  Pride Flag, during a practice session on November 19 at the inaugural Qatar Grand Prix in Doha. And then again, when he won the final race on Sunday.

The motto “Still I Rise” usually appears on the back of Hamilton’s helmets, but his new helmet read: “We Stand Together.”

Speaking to the press at a Formula One press conference on Thursday, Hamilton (36) said, “Equal rights is a serious issue. I do think as these sports go to these places, they’re duty-bound to raise awareness for these issues and these places need scrutiny and needs the media to speak to speak about these things.”

“I just feel that if we are coming to these places, we need to be raising the profile of the situation,” Hamilton said.

Homosexuality is illegal in Qatar and gay men can face up to three years of imprisonment along with fines. Muslim gay men can face the death penalty under Sharia law, although such a sentence has not been imposed.

Campaigning for LGBTQI civil rights is also illegal and currently there is no legal status for same-sex relationships. There are also no protections for the LGBTQI community against discrimination in housing and employment and military service is not permitted.

Amnesty International, has called Qatar’s human rights record “troubling,” and in a press release said, “drivers and their teams should be prepared to speak out about human rights in Qatar in the lead-up to the race, doing their bit to break the spell of sportwashing and image-management”.

On its website, Formula One includes a Statement of Commitment to Respect for Human Rights saying, “Formula 1 companies are committed to respecting internationally recognised human rights in its operations globally.”

Sunday’s Grand Prix event was the first Grand Prix to be held in Qatar after the country signed a ten year contract with Formula One.

British racing driver and co-founder of Racing Pride, Richard Morris tweeted, “This is what we mean when we talk about using your platform for good and carrying your values with you. The symbolism of this, in one of the world’s most dangerous regions for #LGBTQ+ people, is enormously powerful. I can’t even express my admiration for Lewis today.”

Morris told the PA news agency that Hamilton’s advocacy “fills me with hope.”

”It is an incredible act of allyship from Lewis to show solidarity with the LGBTQ+ community in the context of Formula One visiting a region in which LGBTQ+ people face discrimination and challenges to their human rights. It is a demonstration of the capacity the sport has to use its platform positively to promote values of inclusion around the world.”

Racing Pride tweeted, “We applaud @LewisHamilton for adding the rainbow flag to his helmet for this weekend’s #QatarGP. It is a magnificent and powerful gesture of solidarity with our #LGBTQ+ community around the world and is very much appreciated. Thank you, Lewis.”