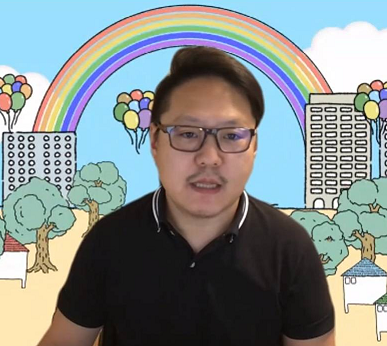 Ube has become the first city in Yamaguchi Prefecture to introduce partnership certificates that grant rights to LGBTQ couples, prompting local companies to review their corporate rules and welfare programs.

With companies in the prefecture already losing their labor force to firms in major cities where generous worker welfare systems are more common, experts note that in order to survive, smaller companies in rural cities must embrace diversity to attract new hires. That diversity includes sexual minorities.

In early October, the Yamaguchi Bar Association held a webinar for corporate managers and human resource staff of small- and medium-sized companies to discuss how to engage with both employees and customers from sexual minorities. About 50 people participated.

During the event, Nobuhisa Miura, 44, head of Colorful Change Lab, a Fukuoka-based nonprofit, shared his experience of coming out as gay at the age of 30. People around him would often speak about how they thought men should behave, he explained, which caused him to become uncomfortable and quit his job every two years.

“Coming out was like putting my life on the line,” Miura said. “I want you to be aware that some of the people you work with may be LGBTQ.”

He gave an example from a company in Fukuoka, which had revised its policies to cater to the needs of sexual minorities. By becoming inclusive, the company attracted not only potential LGBTQ employees but also other young people who wanted to apply to companies that support inclusion.

“If companies start to embrace diversity, they will be able to recruit more talented people,” he added. “If they do not change their traditional attitudes, then they will lose the support of younger generations.”

Nishi-Chugoku Shinkin Bank Ltd., based in Shimonoseki, Yamaguchi Prefecture, began offering housing loans for same-sex couples in October, adding these partnerships to its definition of spousal relationships when applying for loans.

Now LGBTQ couples can apply for a mortgage if they submit a document issued by the local government certifying their partnership, or a document ratified by a notary public and a copy of the certificate of property registration.

“Given that there is a certain number of LGBTQ people (in the area), we want to help those who are in need as a regional bank,” said Takaya Tanaka, general sales manager at Nishi-Chugoku Shinkin Bank.

However, compared to larger cities such as Tokyo and Osaka, very few companies in Yamaguchi Prefecture have corporate policies acknowledging LGBTQ rights. A website with job postings for sexual minorities showed only three openings in the prefecture — none of them for local companies. In contrast, 282 job openings were listed for Tokyo.

“Young people who will be entering the workforce have been educated and are aware about issues regarding the LGBTQ community,” said Tomoe Suzuki, a lawyer and secretary-general of Rainbow Yamaguchi, a Shimonoseki-based citizens’ group raising awareness about sexual minorities.

“If the company’s internal system is not up to the task, the entire region may lose its talent pool, which will result in depopulation,” she added.

Suzuki once had an acquaintance at work who had not disclosed his homosexuality and was called “a freak” because he was not married yet.

“It is difficult to spot members of the LGBTQ community,” Suzuki stressed. “But stereotypical ideas that people need to get married, which comes from ignorance, make the working environment uncomfortable for LGBTQ people. If companies take action, it would further push local governments to follow suit.”

“I hope companies do what they can, starting with educating workers and revising employment regulations.”

PrevPreviousIn Indonesia, LGBTQ ‘wayang’ shadow puppets have a message of tolerance, without the sermon
NextStar Trek’s Queer Fluidity is Giving Fans the Brighter Future They DeserveNext