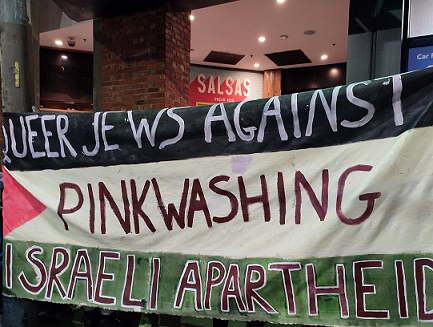 There’s only so much room for inclusivity, tolerance, and diversity on the Left end of the spectrum.

The Melbourne Queer Film Festival (MQFF), I suspect, is not an event to which many MercatorNet readers have rushed to secure tickets. This fixture on the LGBT-etc calendar, squeezed in between Carols by Queerlight (self-explanatory) and Southern HiBearnation (no, Google that one yourself) offers attendees two weeks of cinematic merry-making, or so I’d been led to believe.

The theme of this year’s event, I’m sorry to report, is frequent sniping and a decided lack of chirpiness, and I see little prospect of renewed cheer occurring before closing night.

The trouble began with the inclusion in the lineup of Adam Kalderon’s film The Swimmer, a story about a gay Olympics prospect, the institutional discrimination he faces, and his struggle for self-acceptance. Topical and important issues, the reviewers would say. The film also features, I have been reliably informed, lingering close-ups of strapping young fellows in Speedos. For many viewers, that all sounds like a jolly night at the cinema, so one could be excused for wondering what all the bloody fuss is about.

Well, The Swimmer, you see, is an Israeli production, and it turns out that screening such a film is something of a festival faux pas. As soon as the incriminating schedule arrived in the inbox, there was a good deal of inquiry as to why MQFF had failed to adopt the expected policy of anti-Israel fanaticism. A vigorous social media campaign soon got underway, urging MQFF to drop the film, apologise for all the bruised feelings, and commit to being a better ally in the future.

This noisy reaction is due to the fact that some portion of the festival’s supporters also happen to be enlistees in Boycott, Divestment and Sanctions (BDS), a movement which seeks to extirpate all traces of Israel’s business, cultural and general dealings with the rest of the world. One of the many accusations they bung around is pinkwashing, a term which calls for a bit of elucidation.

Unlike Iran or Nigeria, where authorities punish homosexuals by hanging or stoning, Israel is welcoming and tolerant of all, a fact which has caused a lot of grumpiness on the contemporary left. For its critics, Israel’s celebration of its LGBT community through film and other means is a slick but sinister marketing trick: under the cover of social progressivism, Israel hides its violent apartheid and genocide and, well, you know the rest of the charge sheet by now.