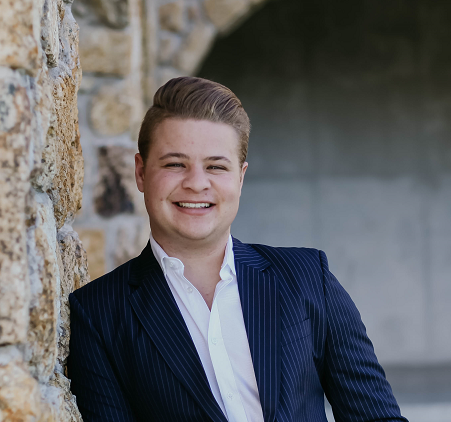 There is much power in young people looking to make a change in the world; and that’s what Tony McPherson (21) is looking to achieve during Namibia Pride Week 2021.

The award-winning philanthropist (who has received a Forbes 30under30 fellowship in the USA, and a Youth Entrepreneur of the Year Award through SMESA in 2018 and 2019 to name a few), understands that he has been in an unusually privileged position at such a young age, and so at 18 he founded the McPherson Foundation as a charity aid organisation.

During his stay in Namibia for Pride, he will be travelling with Mr Gay World, Louw Breytenbach; and will be engaging with President Hage Geingob and various youth organisations on LGBTQIA+ rights in the country.

“African countries are making headway on basic human rights, such as same-sex marriage, with South Africa legalizing it in 2006 and Botswana following suit 15 years later, by legalizing same-sex marriage only yesterday. With all the advancements the world has seen in the past 21 years, and during my life, it is astounding that Namibian government are looking to undo the progress made through shocking statements and actions against the LGBTIQA+ community”, says McPherson.

Tony is looking to raise awareness and represent those who believe they do not have a voice during his time in Namibia. Stay up-to-date on McPherson’s progress in Namibia by following him on Twitter at @tonymcphersonZA

At only 21 years of age, McPherson is a young activist, philanthropist and entrepreneur that has achieved more in his short lifetime than many have achieved in double the amount of time.

Based in Somerset West, Western Cape, McPherson attributes much of his entrepreneurial prowess to that of a long lineage of businessmen and women. His grandfather, Ivor Duncan, founder and inventor of EmOx™ Oxygen, started grooming McPherson – then aged 17 – to eventually take over his pharmaceutical company. From working on the factory floor to overseeing product marketing, McPherson already demonstrated acute knowledge of how to run the business when his grandfather suddenly passed away in September 2017 and subsequently became CEO of McPherson Holdings at the age of 18, making him the world’s youngest CEO of a pharmaceutical company.

Through his advisory work with South Africa’s current government, McPherson has developed strong ties with the United Nations. In July 2020, he was named Youth Representative for South Africa to the Model United Nations (MUN), which is an educational

simulation in which delegates can learn about diplomacy, international relations, and the United Nations.

McPherson is also the founder of a charity aid organisation, McPherson Foundation, which strives to uplift through empowerment through strategic investments, donations, and government funding. The foundation also supports local organisations such as the Hali Trust, The Red Cross War Memorial Children’s Hospital, and Heartlands Baby Sanctuary.