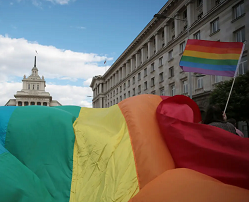 On Tuesday, the European Union’s top court ruled that each of its 27 member states must legally recognize same-sex parents and their children as a family.

A case was brought by Bulgarian citizen Kalina Ivanova and Gibraltar-born British citizen Jane Jones after they were denied a Bulgarian birth certificate for their newborn daughter, Sara, because the EU member state does not recognize same-sex marriages, according to The Hill.

Because Sara was born in Spain, an EU member state where same-sex marriage is legal, both women were registered by Spanish authorities as her mothers on her birth certificate, LGBTQ advocacy group ILGA-Europe told The Hill. However, the couple had no other choice but to apply for Bulgarian citizenship for their daughter, according to ILGA-Europe.

Still, Bulgaria denied Sara citizenship because her parents are of the same sex, which deprived her of personal documents and the ability to travel outside of Spain, as well as restricted her access to education, health care, and Social Security, according to ILGA-Europe.

In its ruling, the European Court of Justice stated that EU citizens have a legal guarantee of free movement between countries and consequently must acknowledge the relationship between parents and their childen.

“That refusal could make it more difficult for a Bulgarian identity document to be issued and, therefore, hinder the child’s exercise of the right of free movement and thus full enjoyment of her rights as a Union citizen,” a press release from the court said.

The court also determined that recognizing families with same-sex parents “does not undermine the national identity or pose a threat to the public policy” of another member state where same-sex marriage is not legal, such as Bulgaria, according to a press release.

“We are thrilled about the decision and cannot wait to get Sara her documentation and finally be able to see our families after more than two years,” Ivanova and Jones said in a statement to ILGA-Europe.

“It is important for us to be a family, not only in Spain but in any country in Europe and finally it might happen. This is a long-awaited step ahead for us but also a huge step for all LGBT families in Bulgaria and Europe.”