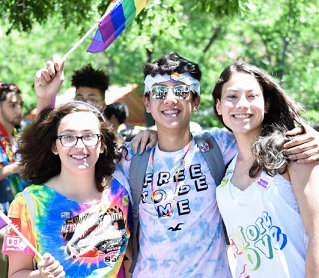 A new study carried out by the U.S. Census Bureau’s Household Pulse Survey reveals that at least eight per cent of the country’s adult population identify as lesbian, gay, bisexual or transgender. That equals to around 20 million who identify as LGBT –  double the numbers estimated previously.

A further 2% of participants indicated that they “identify with a sexual orientation other than lesbian, gay, bisexual, or straight,” which could encompass a number of other orientations such as pansexual and asexual.

The Human Rights Campaign Foundation (HRC) released a report analysing the recent results titled “We Are Here: Understanding the Size of the LGBTQ+ Community” in which the organisation emphasised the importance of the survey.

“LGBTQ+ people are here – in every town, in every city, in each and every ZIP code. This data shows what we’ve suspected: our community is larger and more widespread than we could have known up to this point,“ said Joni Madison, Human Rights Campaign Interim President in a press release.

The sampling holds great significance as HRC reports that many attempts have been made to document the size and demographics of the LGBTQ+ community in the US throughout the years but have faced challenges with bias.

“We’re proud to bring this data to light and set the stage for a future where all the millions of LGBTQ+ people in America enjoy full legal and lived equality. I commend the Biden administration and the U.S. Census Bureau for finally allowing researchers to count us, and look forward to seeing the LGBTQ+ community counted in further studies,” added Joni Madison, Human Rights Campaign Interim President, in the press release.

According to the data, 1% or more than 2 million of respondents identify as transgender, which is higher than any prior estimates that had put the numbers of transgender people  at about 1.4 million. Additionally, the survey reported that bisexual people made up the largest single demographic with about 4% of the surveyed individuals identifying as such.

When looking specifically at the different states, California and Texas are home to the largest number of LGBTQ+ adult residents, with an estimated 2.6 million and 1.7 million respectively.

This perhaps does not come as a surprise when taking into consideration that the two are some of the US’ biggest states.

However, the analysis concludes that the community is not just represented in big territories but that LGBTQ+ people live in every single community in every state. States less populated than California and Texas tend to have a higher percentage of their population identifying as LGBTQ+.

© Star Observer 2021 | For the latest in lesbian, gay, bisexual, transgender, queer and intersex (LGBTIQ) news in Australia, be sure to visit starobserver.com.au daily. You can also read our latest magazines or Join us on our Facebook page and Twitter feed.