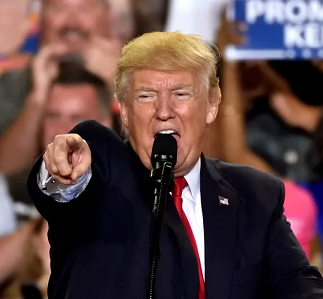 Donald Trump and Viktor Orban have long found common ground around their shared opposition to the LGBTQ community.

“Viktor Orban of Hungary truly loves his Country and wants safety for his people,” Trump wrote on Monday. “He has done a powerful and wonderful job in protecting Hungary, stopping illegal immigration, creating jobs, trade, and should be allowed to continue to do so in the upcoming Election. He is a strong leader and respected by all.”

It’s hardly surprising that Trump endorsed him. Orban endorsed Trump’s first 2016 presidential run early on, celebrated Trump’s win and then supported Trump’s 2020 re-election campaign. Trump also invited Orban to the White House in May 2019, something that a Hungarian Prime Minister hadn’t done since 1989.

Trump and Orban have also found common ground around their shared animus against the LGBTQ community.

Under the guise of “anti-pedophilia” laws, Orban’s administration banned schools and the media from mentioning gay people, amended the constitution to define marriage as only being between a man and woman, effectively erased transgender people by banning them from legally changing their gender and pulled out of the Eurovision song competition because it was a “homosexual flotilla.”

Orban’s ruling Fidesz party has made hateful remarks about LGBTQ people, trolled Pride events and boycotted business campaigns that feature same-sex couples. His cultural commissioner, Imre Kerényi, said in 2014 that theater and film are “in the hands of a lobby of faggots.”

In a 2015 interview, Orban said that things would get worse for “the Hungarian homosexual community” if “the community of homosexuals starts being more provocative.”

Orban’s anti-LGBTQ actions compelled the World Congress of Families, an annual anti-LGBTQ conference, to praise him as a “pro-family hero.” The Heritage Foundation also praised him as well, saying he will “replace the shipwreck of liberal democracy by building 21st Century Christian democracy.”

Despite his so-called “Christian” politics, the Pope himself has criticized Orban’s policies.

Additionally, the European Parliament voted to condemn Hungary’s anti-LGBTQ attacks, and leaders of European Union (EU) member nations said that Hungary should no longer remain an EU member because of its anti-LGBTQ politics.

Orban’s anti-LGBTQ attacks have coincided with an erosion of democracy in his country. The pro-democracy group Freedom House downgraded Hungary from “free” to “partly free” in its annual report. The CIVICUS Monitor watchlist placed Hungary on its list of countries that have seen a rapid decline in fundamental civic freedoms – including the freedoms of association, peaceful assembly and expression

Trump has long idealized and legitimized “strongman” fascists and dictators like Orban, Brazilian President Jair Bolsonaro and Russian President Vladimir Putin. Trump imagines himself as a lone savior who can perpetually rule a country by controlling its press and election operations. Orban and his ilk provide a blueprint on just how to do that.