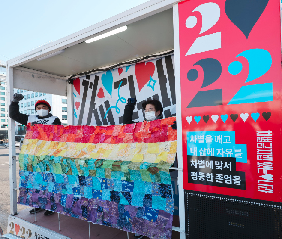 Discrimination against women, lesbian, gay, bisexual, and transgender people and racial and ethnic minorities is pervasive in South Korea, a new report from the Human Rights Watch said on Thursday.

The annual 32rd World Report 2022 highlights the human rights situation in nearly all of the 100 countries where the international organization works.

It also has the widest gender pay gap among countries that belong to the Organization for Economic Co-operation and Development, which stands at 31 percent.

The report also noted that despite the growing LGBT rights movement, sexual minorities continue to face hostility and severe discrimination, especially in the armed forces. It cited the case of the country’s first openly transgender solider, Byun Hee-su, who was forced to be discharged and later committed suicide.

Activists and progressive legislators have tried to push an anti-discrimination law to protect the LGBT community in recent years alongside women, people with disabilities and foreigners. But the country has seen little meaningful progress, in the face of vocal opposition from Christian conservative groups.

In the past two years, the #MeToo movement gained “some ground,” the report said, though it also faced backlash.

Last year, several South Korean retailers were forced to apologize for using a “pinching hand” gesture in their ads after men’s rights activists claimed it resembled the logo of a controversial online feminist community called Megalia.

Some of the companies include the convenience store chain GS25 and online fashion store Musinsa.

“In June, Lee Jun-seok, a politician who advocates for “men’s rights” and claims that men in South Korea are targets of reverse discrimination, was elected leader of the main opposition conservative People Power Party,” the report noted.

South Korea has also struggled to address rampant gender-based cyber sex crimes including widespread posting of sexual images of women and girls on the internet without their consent, the report said.

PrevPreviousOlly Alexander vows to be even sexier after complaints BBC Years & Years special ‘too sexy’
NextEdgar Gomez on Sex, Desire, and Going on PrEPNext