Gay Fathers Are as Happy as Heterosexual Fathers 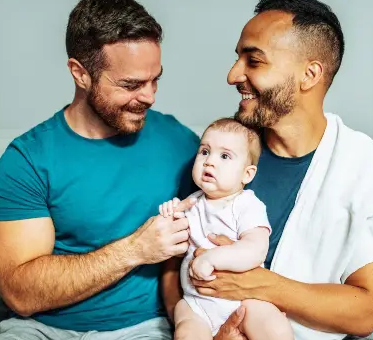 Gay fathers are no less happy on average than heterosexual fathers. Well-being is better explained by relationship quality and social context.

The majority of the literature on fathering has come from studies of heterosexual fathers who are biologically related to their children, which were spontaneously conceived. This narrow group of fathering however, limits what research can tell us about the planning for, and experience of fathers who are in other groups. These new family forms may include gay fathers, and/or fathers by assisted reproduction technologies.

Gay fathering is always planned, either through surrogacy or adoption. Commitment to parenting is further tested in advance by the additional obstacles gay fathers may experience, such as policy, legislation and cost.

Several studies have shown that gay fathers overall do well, as do their children. In fact, in an adoption study in the UK, gay fathers by adoption had higher well-being than heterosexual adopting parents.

Similarly our studies have shown that parents’ well-being is better explained by their relationship status and social context, than by their sexual orientation.

The take home message for fathers? There are more similarities between fathers from different sexual orientations, or paths to parenting, than there are differences, and the well-being of fathers appears to be explained by similar factors for all kinds of fathers.