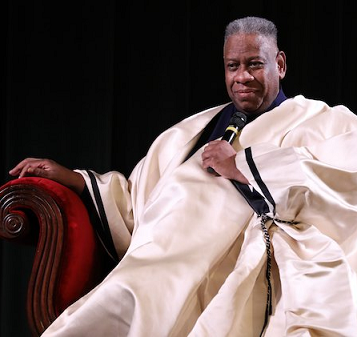 For years he was the only Black editor in the front row at influential Fashion Week shows.

André Leon Talley, who became known across the world as an editor at Vogue magazine, has died, according to reports. Talley was known as a singular figure for years, working as a Black editor in high fashion. He developed close relationships with designers like Karl Lagerfeld as well as Vogue editor in chief Anna Wintour, among others.

The former editor died Tuesday at a hospital in White Plains, N.Y., where he had been living, TMZ reports. It was unclear what he was hospitalized for.

Talley was raised in North Carolina and took to fashion at a young age, watching women parade in and out of church. He was raised by his grandmother, who encouraged his interest in art, style, and creativity, and later attended Brown University, where he studied French literature.

After college he interned for Diana Vreeland, the legendary Vogue editor, at the Metropolitan Museum of Art. She worked in the Costume Institute. He went from there to working at Andy Warhol’s Interview Magazine and then Women’s Wear Daily, an industry trade journal. While at WWD he moved to Paris and became the Paris bureau chief, putting him in constant contact with the industry’s most powerful designers. His reviews continually gained him notice while he also made close friendships with the likes of Lagerfeld and Yves Saint Laurent.

Eventually he went to Vogue, where he met Anna Wintour, who was another editor there at the time. The two developed a working relationship, and after Wintour ascended to editor in chief, Talley became creative director, a position he held from 1988 to 1995.

After serving as creative director of Vogue, Talley was editor at large for the title. He also served as a top editor for Numero Russia. He said that he left Vogue for Numero because the salary was bigger. When he left Numero, after only a year, he said it was because of Russia’s anti-LGBTQ+ laws.

“The one thing that really impacted me was Rachel Maddow’s reporting last winter on the anti-LGBT laws in Russia,” Talley told WWD. “There are no civil rights for people there. That’s one of my reasons for departing.”

For much of his career, Talley demurred on details of his personal life, but he did once identify as fluid in terms of sexuality.

After that he continued to work for Vogue and did some work for Zappos Couture, among other projects. For a few years he was a staple hosting the red carpet for Vogue at the Met Gala. He also served as a consultant, providing advice to high-profile clients such as Michelle Obama on matters of style.

Talley wrote two memoirs: A.L.T.: A Memoir and The Chiffon Trenches: A Memoir. He was also the subject of the film The Gospel According to Andre. This came in addition to Talley serving as a go-to fashion historian for various documentaries like Valentino: The Last Emperor, Manolo: The Boy Who Made Shoes for Lizards, and The First Monday in May.