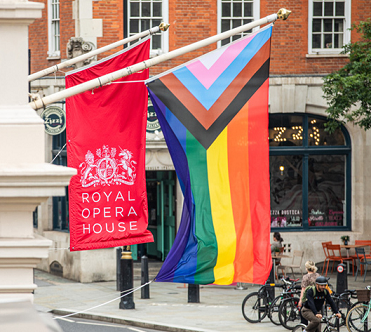 This short, Off Broadway coming-of-age story is about a young gay actor, who becomes an activist in New York, after watching a life-changing play. The backdrop of the touching, funny production is the HIV/AIDS epidemic of the 1980s. John Bell of Outlander fame stars in the leading role.

Be whisked behind the Royal Opera House’s curtains to discover tales of the innumerable contributions made to music and theatre by LGBTQ+ icons—including pioneering composers and choreographers, and gender-fluid performers.

Find gay tombs in Westminster Abbey and learn about Georgina Somerset — the UK’s first openly identified intersex woman — on LGBT+ History: From Law Breakers to Party Makers, a tour from Dani the Guide. Dani is also doing a special series of Islington walks throughout February, as well as a one-woman lesbian cabaret on 18 February. Busy person.

4. Go dating with Disney characters in a Clapham pub (10 Feb)

Judging by some of the innuendo in the spiel for this show at Clapham’s Two Brewers, you can expect a riotous night and then some. London’s drag talent is out in force for this Valentine’s special, in which various Disney characters are recreated/lampooned. There’s also an auction raising funds for HIV charity Wandsworth Oasis. Thalia Ostara will be keeping things in check (or maybe not).

5. Create a tile in homage to the AIDS Memorial Quilt (13 Feb)

Feeling crafty? LGBT+ potters group Phoenix Pottery invite you to design, fire and paint a ceramic tile that tells something about your own personal history. It’s an artful nod to the famous AIDS Memorial Quilt, which is made up of 50,000 panels.

6. Learn about the challenges of queer refugees (16 February)

Ice&fire Theatre, Micro Rainbow International, and Lesbians and Gays Support the Migrants team up for Actors For Human Rights: This Is Who I Am — an eye-opening evening of workshops, readings and Q&A panel discussions on the struggles faced by queer refugees to the UK.

Actors For Human Rights: This Is Who I Am, St. Margaret’s House (Bethnal Green), from £10 (or free to anyone affected by the asylum process), 16 February

7. Delve into the Royal College of Physicians’s archives (17 Feb)

The Royal College of Physicians opens up its archives for a virtual talk covering 350 years of medical attitudes towards, and experiences of, LGBTQ+ people. Subjects include: What contributions did physicians make to the ground-breaking Wolfenden Report?

That which never can be suppressed’: LGBTQ+ history in the RCP collections, online, free (donation encouraged), book ahead, 17 February

8. Join in with a family-friendly queer maritime festival (19 Feb)

Greenwich’s National Maritime Museum hosts Out at Sea — a free, day-long festival celebrating queer maritime history through time. With workshops, storytelling, and a special tour of the museum, it’s fun for all the family. The museum is hosting various other events for LGBT+ History Month, including the annual queer takeover of the Queen’s House.

11. Go on an LGBTQ+ object trail at the British Museum (all Feb)