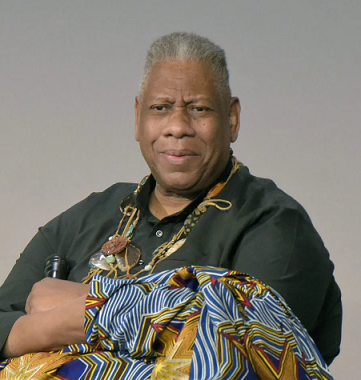 The fashion journalist and stylist is best known for being editor of Vogue from 1988 to 1995, and has since written three books and been a judge on America’s Next Top Model.

He was the first African-American male to edit the iconic fashion magazine and was always advocating for diversity in the fashion industry.

At the time of writing this, his cause of death is unknown, but TMZ has reported that he died on Tuesday (January 18th) at a hospital in White Plains, New York.

As tributes to the larger-than-life character flood social media, let’s get to know him a little better. Was he gay? And did he have a partner?

In an interview with Vanity Fair in 2013, André said that he didn’t like the label ‘gay’ as he never considered himself that and has only ever been in love with women.

“When Grigoriadis asks Talley if he thought he was gay, even in high school, he responds, ‘No, no, no. I was just into my magazines and the drawings. I had a very strict upbringing, almost puritanical.’” the magazine wrote.

“Talley tells Grigoriadis that he rejects the ‘label’ and says that, while he has ‘had very gay experiences, yes, I swear on my grandmother’s grave that I never slept with a single designer in my life,” it continued.

He admitted he’s “not heterosexual”

Five years later, the former Vogue editor went on the Wendy Williams Show to discuss his new documentary and addressed his sexuality once more.

“No, I’m not heterosexual. I’m saying I’m fluid in my sexuality, darling,” he said.

Again, he didn’t use the label ‘gay’ but essentially confirmed that he was bisexual and open to romantic relationships with anyone.

His romantic life was very private

André never had a known partner, and throughout his life in the public eye, kept his relationships very private.

He told Vanity Fair in 2013 that he had “never been in love with a man” and had only ever been in a relationship with “two women”.

“One was a fellow student in Providence, the other a society woman with whom he fell in love after a night of dancing in Manhattan and whose name he declines to share because she later married and had children,” the magazine wrote.

However, he also revealed that he had “very gay experiences” throughout his life.

PrevPreviousSouth Africa’s fourth wave is waning, but don’t celebrate just yet, say experts
Next11 Things To Keep You Busy For LGBT+ History Month In LondonNext