New Zealand will not impose lockdown when omicron hits 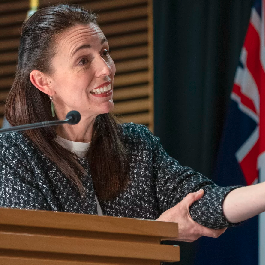 WELLINGTON, New Zealand — New Zealand is among the few remaining countries to have avoided any outbreaks of the omicron variant — but Prime Minister Jacinda Ardern said Thursday an outbreak was inevitable and the nation would tighten restrictions as soon as one was detected.

But she also said that New Zealand would not impose the lockdowns that it has used previously, including for the delta variant.

“This stage of the pandemic is different to what we have dealt with before. Omicron is more transmissible,” Ardern said. “That is going to make it harder to keep it out, but it will also make it more challenging to control once it arrives. But just like before, when COVID changes, we change.”

Ardern said that within 24 to 48 hours of omicron being detected in the community, the nation would move into its “red” setting. That would allow businesses to remain open and domestic travel to continue, but would require schoolchildren to wear masks and limit crowds to 100 people.

Currently most of New Zealand is at the “orange” setting, which requires some mask wearing and proof of vaccination but doesn’t limit crowd sizes.

About 93% of New Zealanders aged 12 and over are fully vaccinated and 52% have had a booster shot. The country has just begun vaccinating children aged between 5 and 11.

New Zealand has managed to contain the spread of the delta variant, with an average of about 20 new cases each day. But it has seen an increasing number of people arriving into the country and going into mandatory quarantine who are infected with omicron.

That has put strain on the quarantine system and prompted the government to limit access for returning citizens while it decides what to do about reopening its borders, angering many people who want to return to New Zealand.

Opposition leader Christopher Luxon said Ardern had planned poorly for omicron and had managed to secure into the country less than one rapid COVID-19 test per person.

“That is a stunning indictment on the government’s lazy lack of planning,” he said.

Ardern said the most important thing that people could do was to get a booster shot, which would reduce the severity of an omicron infection and allow most people to recover at home rather than needing hospital care.

PrevPreviousPeople with older brothers more likely to be gay, scientists say
NextWhy some people in close quarters get COVID-19 — and others don’tNext