A Brotherhood of Bears Flourishes Despite Russia’s Anti-LGBT Agenda 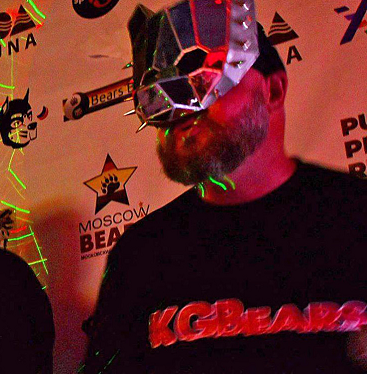 The BEARsBURG society brings together men who reject effeminate stereotypes of queerness for trips to the banya, café meet-ups, walking tours and film nights.

ST. PETERSBURG — If you didn’t know Club Malevich existed you would never find it. There are no signs, windows, grand entrances or bouncers at the back of the defunct industrial complex housing its long, black, neon-lit bar and dance floor.

The location is the perfect hideaway for St. Petersburg’s secretive BEARsBURG society — a modern Russian incarnation of a gay sub-group which originally developed in the United States toward the end of the 1970s as a reaction against effeminate stereotypes of queer men.

On a Thursday night in November around twenty men have gathered to watch “Dance of the Forty-One,” a historical film based on a queer scandal involving cross-dressers at the highest level of early 20th century Mexican society. As the credits start to roll, the viewers scatter and make way for the highlight of the evening — a boozy session of belting bear karaoke, which breathes new and deeper-voiced life into the 90s ballads of Russian singer Tatiana Bulanova.

It’s a party behind an unmarked door in a country that has seen hate crimes against the LGBT community increase since the 2013 introduction of a law banning “gay propaganda among minors.”

“I have created my own bear state,” said Anton, who founded BEARsBURG in July 2021 as a grassroots society to bring together the larger, hairier men of St. Petersburg’s gay scene through social and cultural events. Like all the men interviewed for this story, he asked for his surname to be withheld.