White House discussed plans to send up to 50,000 troops to Eastern Europe 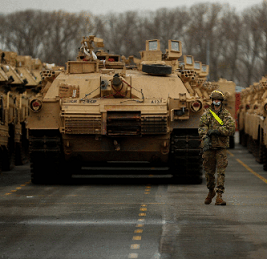 Yesterday evening, the New York Times reported that the Biden administration is discussing plans to deploy thousands or tens of thousands of troops to the borders of Russia and Ukraine.

Despite the Biden administration’s threadbare attempt to present this as a defense of Ukrainian sovereignty against Russia, it is apparent that Washington is preparing a military escalation aiming to provoke Russia, a major nuclear power, into a war.

Biden apparently discussed plans with Pentagon strategists to deploy 1,000 to 5,000 troops to Romania and the Baltic republics of Estonia, Latvia and Lithuania. This could be increased up to tenfold, to 50,000 troops. This comes after Washington announced plans to provide the Ukrainian government with armaments to build bases for missile systems that could launch strikes on Moscow in a matter of a few minutes.

The New York Times’ story on the report acknowledged that this would be a “major pivot for the Biden administration … moving away from its do-not-provoke strategy.” It also cited calls for a former top Pentagon planning official, Jim Townsend, calling for a massive military build-up across Europe predicated on the assumption that war with Russia would erupt.

“It’s likely too little too late to deter Putin,” Townsend claimed. “If the Russians do invade Ukraine in a few weeks, those 5,000 [US soldiers] should be just a down payment for a much larger US and allied force presence. Western Europe should once again be an armed camp.”

Yesterday, Washington ordered US diplomats’ families and advised US citizens to leave Ukraine, “due to the continued threat of Russian military action,” a measure usually taken if war is imminent.

US Colonel Alexander Vindman, an officer involved in top-level talks between Washington and the Ukrainian regime, bluntly spelled out US calculations yesterday. Calling for provocative NATO weapons deliveries to Ukraine, directly on Russia’s border, Vindman told MSNBC: “These things are already moving. It’s almost certain that this is going to occur, and now is the time to take those last-minute steps.”

Declaring that NATO is “almost locked into a course of action,” Vindman endorsed plans for war with Russia. He said, “Why is this important to the American public? It’s important because we’re about to have the largest war in Europe since World War II. There’s going to be a massive deployment of air power, long-range artillery, cruise missiles, things that we haven’t seen unfold on the European landscape more than 80 years, and it is not going to be a clean or sterile environment.”

The pretext on which this war is being launched—that the NATO is defending Ukrainian democracy and national sovereignty—is a fraud. The far-right Ukrainian regime in Kiev was installed by a US- and German-backed putsch in February 2014 that toppled a pro-Russian government. Since then, Washington and the other NATO powers have been systematically moving to arm Ukraine as a base for operations against Russia. These plans are now being dramatically escalated.

Today, NATO is beginning war games in the Mediterranean, “Neptune Strike 22,” that will last until February 4, involving the aircraft carrier USS Harry Truman. US defense department spokesman John Kirby on Friday claimed it had nothing to do with “scenarios” that “could play out with regard to Ukraine.” However, he then made clear the exercise aims to threaten Moscow over Ukraine.

Russia’s positioning of troops on Russian soil near the Ukrainian border, he said, “continues to be concerning … We’re going to make sure that we have options ready to reassure our allies, particularly on NATO’s eastern flank. If there’s another incursion and if they need that reassurance, if they need the capabilities to be bolstered, we’re going to do that.”

Neptune 22 is one of a series of NATO war games surrounding Russia with vast forces. On February 20, the “Dynamic Manta 22” anti-submarine exercise in the Mediterranean will begin, and on February 22 the “Dynamic Guard” exercise in Norway. This will transition into Cold Response 2022. The largest Norwegian-led military maneuver since the 1980s is to involve 35,000 troops from 26 nations, including 14,000 soldiers, 13,000 seamen, as well as 8,000 air force personnel and staff. The first troops are reportedly already on site and have begun exercises.

NATO claims that Russia is driving this confrontation are absurd on their face. It is denouncing Russia for having troops located on its own soil, while it is sending NATO troops and lethal weaponry up to Russia’s borders. A substantial faction of the ruling elite in the NATO countries is pushing for a war with Russia, speculating about Russian intentions while fabricating accusations in order to concoct a case for war.

The British government, reeling from a scandal over Prime Minister Boris Johnson’s handling of the COVID-19 pandemic, launched a further provocation against Moscow yesterday. On Saturday, UK Foreign Minister Liz Truss and the British Foreign Office released a statement accusing Moscow of preparing a coup to install a pro-Russian regime in Kiev. This charge, for which London released no evidence, was a provocation that fell apart under the weight of its own incoherence.

“We have information that indicates the Russian government is looking to install a pro-Russian leader in Kyiv as it considers whether to invade and occupy Ukraine. The former Ukrainian MP Yevhen Murayev is being considered as a potential candidate,” Truss declared.

Truss’ statement continued: “The information being released today shines a light on the extent of Russian activity designed to subvert Ukraine, and is an insight into Kremlin thinking. … As the UK and our partners have said repeatedly, any Russian military incursion into Ukraine would be a massive strategic mistake with severe costs.”

This claim was soon discredited: Murayev, the supposed leader of London’s hypothetical coup, pointed out that he faces a state ban in Russia and his assets there have been seized. “You’ve made my evening. The British Foreign Office seems confused,” he told Britain’s Observer. “It isn’t very logical. I’m banned from Russia. Not only that but money from my father’s firm there has been confiscated.”

Nonetheless, the US National Security Council embraced this claim to again denounce Russia. Its spokeswoman, Emily Horne, said, “this kind of plotting is deeply concerning. The Ukrainian people have the sovereign right to determine their own future, and we stand with our democratically-elected partners in Ukraine.”

The campaign is not only a continuation of US-NATO interventions against Russian allies in Ukraine and in Syria, where NATO has fought a decade-long proxy war. It is also a reckless attempt to deal with internal class and social tensions that are reaching explosive levels as the world enters the third year of the COVID-19 pandemic. Desperation increasingly dominates the calculations of major capitalist governments.

The NATO powers as well as the post-Soviet capitalist kleptocracy in Russia have all imposed a disastrous policy of “living with the virus” on the working class. There have been over 2 million COVID-19 deaths in the NATO states and over 326,000 in Russia. Last week alone saw over 13 million new cases and 28,000 COVID-19 deaths in NATO, and at least 270,000 cases and 4,799 deaths in Russia. Yet governments across the region are ending public health measures to restrict the contagion and instead allow the virus to spread even faster.

Since the year began, mass protests and strikes have erupted against official pandemic policies in the United States, Greece, France and Italy. It is clear that, as they seek to impose further policies of mass infection and death upon rising working class opposition, the major imperialist powers are accelerating a turn towards militarism, police-state rule and wars that could threaten millions or billions of lives.

To prevent the ruling class from plunging the planet into the abyss, the growing opposition among workers and youth internationally must be mobilized based on a socialist perspective in a movement to oppose war and to end the COVID-19 pandemic. Control over the resources of society must be taken out of the hands of an irresponsible and historically condemned ruling elite. This requires the revolutionary mobilization of the working class against the capitalist system.