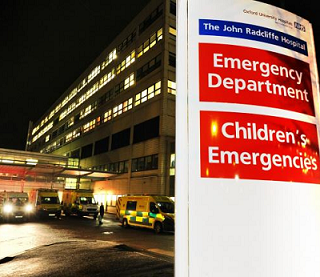 New figures from NHS England revealed that 87 people may have caught Covid while being treated for other conditions at Oxford University Hospitals.

The British Medical Association (BMA) said understaffing and underfunding nationally, coupled with poor infrastructure across many hospitals, have made it harder to control the infection.

Of those, 1,403 were infections that occurred in the community, meaning 87 people may have caught Covid while being treated for other conditions over the period.

In the week of January 16, 128 new Covid patients were being cared for at Oxford University Hospitals Trust, with five of those patients thought to have contracted the virus in hospital.

Across England, 17,900 patients may have caught coronavirus in hospital since July – 12 per cent of those treated for the virus during this time.

Around 2,700 of these infections are believed to have happened in the week to January 16 – 22 per cent of newly admitted Covid patients.

The spread of infection in hospitals has been blamed by the BMA on limited bed capacity coupled with the many hospitals being old and poorly ventilated.

It added that there are very few single-patient rooms available for patients to effectively isolate.

Vishal Sharma, chairman of the BMA’s consultants committee, said: “The NHS has limited bed capacity and many hospitals are old, are poorly ventilated and have very few single-patient rooms in which to effectively isolate patients.

“Unfortunately, that has meant that controlling the spread of Covid-19 within hospitals has been difficult, particularly as restrictions are being eased for the public even though infection rates remain extremely high.”

Dr Sharma added the BMA had also ‘consistently’ raised concerns around poor PPE and was calling for the Government’s upcoming public inquiry into the pandemic to be transparent.

He said: “No one should come into hospital with one condition, only to be made incredibly ill with, or even die from, a dangerous infectious disease.

“Families – including those of our own colleagues who died fighting this virus on the frontline – deserve answers.”

But NHS England said rising infection rates in hospital correspond to increasing rates in the community.

A spokesman said: “Data conclusively demonstrates that the root cause of rising infection rates in hospitals is rising rates in the community and analysis has shown that Covid-19 hospital infection rates account for less than 1% of all cases since the pandemic began.

“Cases have reduced significantly since the NHS vaccination rollout.”

The spokesman added that reports show outbreaks in hospitals are less common than in other settings.