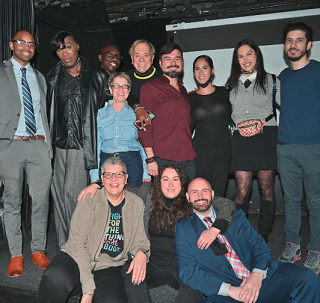 Equality New York, New Pride Agenda, and the LGBT Community Center are collaborating on an effort to advance four LGBTQ initiatives in the state. Leaders of the groups gathered at Industry Bar in Manhattan on January 27 to roll out the policy plan.

“New York is often viewed as one of the most progressive states in our country,” Equality New York executive director Amanda Babine said in a written statement. “However, there is still a significant absence of policies in New York that protect and programs that support LGBTQI individuals. In 2022, we have an opportunity to build new leadership, strengthen communities, and advance the rights of all LGBTQI New Yorkers.”

Equality New York and New Pride Agenda are statewide LGBTQ advocacy groups, while the LGBT Community Center is focused on New York City — but all three of the organizations have strong ties to New York City.

One of the groups’ top priorities is passing the Stop Violence in the Sex Trades Act, a comprehensive sex work decriminalization bill first proposed in 2019 — the same year as the formation of the DecrimNY coalition. That measure, led in the Assembly by Richard Gottfried of Manhattan and in the State Senate by Julia Salazar of Brooklyn, represents a key goal for sex work decriminalization advocates following last year’s successful bid to repeal the so-called ban on “walking while trans,” which was a law used by police to target and harass trans individuals.

The groups also hope to generate support for the Gender Identity Respect, Dignity, and Safety Act, which would ensure proper treatment and placement of transgender, gender non-conforming, and non-binary individuals in state and local correctional facilities.

The final two items on the to-do list pertain to funding. Advocates hope to establish a wellness and equity fund aimed at bolstering trans-led organizations and allocate money for the LGBT Health and Human Services Network, which is led by the LGBT Community Center and supports 70 non-profit organizations serving LGBTQ New Yorkers.

“New York State has made remarkable progress on LGBTQ rights, but our community continues to face high rates of poverty, poor health, criminalization, and discrimination,” Trevon Mayers, the LGBT Community Center’s senior director of advocacy & community engagement, said in a written statement. “These are steep challenges, but with a unified effort, we can overcome them.”

Elisa Crespo, the executive director of the New Pride Agenda, highlighted the need to prioritize the most marginalized New Yorkers.

“We have a once-in-a-generation opportunity to invest in what is a largely ignored and deeply marginalized community — and by that I mean the transgender, gender non-conforming, and intersex community,” Crespo said.