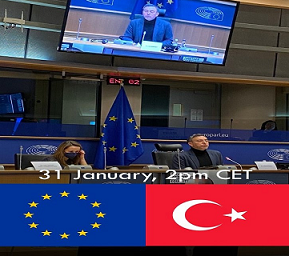 In its meeting on Monday, the committee heard LGBTI+ activists from Turkey.

In the first part of the meeting, committee members and representatives of the European External Action Service (EEAS) and the European Commission discussed relations between Ankara and Brussels.

In the second part, the commission heard LGBTI+ activists from Turkey, including members of the ÜniKuir Association, a group combating discrimination against LGBTI+s at universities.

Marsel Tuğkan, an ILGA Europe representative in Turkey, pointed to the increasing political polarization in the country, which they said adds to the problems faced by LGBTI+s in accessing fundamental rights.

Özgür Gök, an executive of the ÜniKuir Association, said they hope the EU will speak up against the “systematic oppression” of LGBTI+s in Turkey as it does against hate speech towards LGBTI+s in Poland or Hungary.

Melike Botan, the general coordinator of ÜniKuir, said those who commit hate speech against LGBTI+s are not punished and LGBTI+s are deprived of their fundamental rights, such as holding demonstrations. (EMK/VK)