Alarm over suicides and mental health in SA’s LGBT+ community 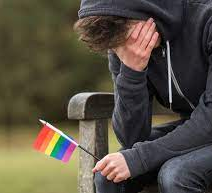 In the wake of two recent tragedies, OUT LGBT Well-being is highlighting the disproportionately high rate of mental health challenges faced by LGBT+ people and the lack of services to provide them with affirming care.

Following the recent tragic suicides of two prominent LGBT+ (lesbian, gay, bisexual and transgender, plus) individuals in South Africa, OUT LGBT Well-being is concerned that not enough is being done to address pressing mental health issues in this vulnerable community.

On 19 January 2022, it was reported that Adrienne Galagatsi, 34, the reigning Miss Cape Town Pride and a University of the Western Cape sports administrator, had taken her own life. An aspirational and popular transgender role model in the community, her untimely death shocked the province.

Galagatsi’s passing follows the November 2021 suicide of another promising figure: former Mr Gay South Africa and DA councillor Lance Weyer, also at the age of 34. Both deaths were presaged by social media posts that suggested that they had struggled with depression.

While these individuals were well-known, research shows that mental health struggles are disproportionately experienced by LGBT+ people.

It’s widely accepted that these mental health disparities are due to so-called “minority stress”; the effect of widespread and often institutionalised stigma, social isolation, prejudice and discrimination. Minority stress, which is a life-long phenomenon, adds to the existing stress already experienced by all people in their lives.

LGBT+ individuals may have more difficulty in securing employment and may not have the family and community support that others have. Often, stigma is expressed through brutal violence, abuse and rejection by family, colleagues and others in the community.

A 2019 report (in which OUT participated) on violence, mental health, and access to healthcare related to sexual orientation and gender identity and expression in South Africa found that levels of depression, anxiety, suicidality, and substance use were far higher in the 832 LGBT+ respondents as compared to those reported for the general South African population.

More than half of the participants (57%), for example, were classified as currently depressed. By comparison, general population studies in South Africa have estimated a one-year prevalence of major depression to be about 5%.

“Compared to other members of society, LGBT+ people face the additional burden of being excluded, rejected or othered every day in some form or the other,” says Dawie Nel, the Director of OUT. “These stressors can become the straw that breaks the proverbial camel’s back, increasing the risk of depression and suicide among LGBT+ people.”

Despite these very real challenges, there is little focus on addressing the mental health needs of LGBT+ people with affirming and non-stigmatising services. Findings of the report suggest that there may be a large percentage of sexual and gender minority people who have not received diagnoses and treatment that could help them manage their symptoms of depression.

It found that almost a quarter of participants had been denied healthcare and 31% reported being called names or being insulted by healthcare staff at some point. In addition, 44% of all participants, and just over half of gender minority participants, reported trying to hide a health concern related to their sexual orientation or gender identity from a healthcare provider.

OUT, which is known for its ground-breaking HIV-related health programmes for men who have sex with men (MSM), is hoping to develop projects and services that will focus on the mental health of the broader LGBT+ community.

“While it’s clear that the desperate need is there, there are very few programmes and opportunities to address this crisis, and those that exist are limited or not widely accessible,” says Nel. “We urge funders, partners, government and other stakeholders to consider how we can work together to provide much-needed mental health services to LGBT+ individuals. As recent events have shown, lives are very much at stake,” Nel adds.

Founded in 1994, OUT LGBT Well-being provides stigma-free HIV and other health services to gay, bisexual and MSM communities. It also works to eradicate LGBT+ hate crimes and discrimination while assisting and supporting victims with paralegal advice and referrals. For more information visit www.out.org.za.