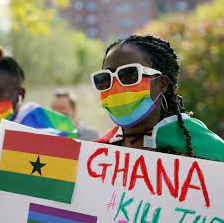 The government has been urged to conduct a cost-benefit analysis of the anti-LGBTQ+ bill to determine what its implication will be on the economy before any decision to pass it.

The bill, which is hugely popular among the mostly religious and traditional Ghanaian populace, is being opposed by some human rights-based advocates from international and local organisations and civil society organisations.

Delivering a presentation dubbed, “The Anti-LGBTQ+bill: Its impact on the economy of Ghana,” a policy analyst of the Integrated Social Development Centre (ISODEC), Mr Bernard Anaba, said the cost benefit analysis would help the government avoid the potential reputational, economic and diplomatic friction that the bill had already triggered which could become worse from its passage into law.

Addressing a round table discussion organised by the Ghana Centre for Democratic Development (CDD-Ghana) on the subject in Accra last Tuesday, Mr Anaba said the Bill had drawn some unpopular attention to Ghana, which could have significant direct and indirect economic impact.

Ghana, he said, had ratified many global and regional conventions on human rights and therefore must take notice of its obligations before passing the bill as there could be both direct and indirect economic impact on the country.

Proponents of the bill, he said, should also consider resolving all the contradictions and sources of conflict and tension with the United Nations system of human rights which had a better chance of prevailing against the bill in the long run.

PrevPreviousProperty rights are not colonial
NextSouthern Africa’s summer has been wetter than normal: Here’s whyNext