Russell T Davies’s ‘Queer as Folk’ changed my life, it should be shown in schools as part of LGBT History 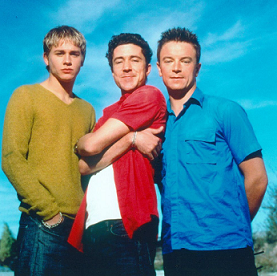 The US version is about to rebooted, but I’m not sure we need a new version when the original is still so educational

The 1990s was a lonely time to be gay and – with Section 28 in full swing and half the British population thinking gay sex was wrong – the safest place for most LGBT teenagers was the closet.

It’s where I spent most of the time growing up in Doncaster, an ex-mining community which, despite its plethora of bars and nightclubs, had just one gay pub – a seedy looking establishment with blacked out windows that my friends would snigger about as they walked passed. It was a dirty secret that I desperately wanted to be a part of, but I was sadly too young and too scared.

So, in the absence of broadband internet, the only other place to go to learn about gay life was the television. At first it was watching Eurotrash in the dark while my parents slept and the BBC’s woeful Gaytime TV, but then something incredible happened. On Tuesday, 23 February 1999, the pilot episode of Russell T Davies’ Queer as Folk aired on Channel 4. And it was glorious.

The story of Stuart, Vince and Nathan living and loving in Manchester was bold, brassy, and no holds barred. It was one of the first British dramas to focus exclusively on characters that were out and out gay and depicted the LGBT community as vibrant and alive, instead of dangerous, freakish and disease ridden. Most importantly for my teenage self, they shagged – a lot – and for the first time, I learned that it could be just as pleasurable as straight sex.

But it wasn’t just me who it impacted. The show normalised homosexuality, and suddenly it was actually cool to be gay. I was in my first year of sixth form the year it aired and was out only to my close friends. But by the second year, there was a wave of classmates declaring their status as gay or bisexual. A cloud of fear had been noticeably lifted.

It was groundbreaking television and in short, a cultural phenomenon that ran for two series and spawned an American version which, after five seasons, finished in 2005. Now the US version is being rebooted this year, which is exciting but the question is: do we really need it?

Today’s gay men and women living in the West are not cowering in the shadows like we did in those dark days before equality laws mostly silenced the bigots and allowed us to marry or even start a family. It’s hard to imagine this new iteration raising many eyebrows or even the most crusty tabloid hack wasting precious column inches to cover the moral outrage over its transmission. Instead of creating something new, the original British show should be revisited, but this time with new eyes.

It’s LGBT history month this February and the theme is art. Queer as Folk might not be a masterpiece, but it is history. So let’s save the series from its online streaming limbo (it’s currently available on All 4) – or, heaven forbid, VHS hell – and bring it into the classroom as part of our schools’ coverage of LGBT issues. There’s no better way for young adults to learn how far we have come and to not let these precious rights, which are all too often taken for granted, be lost for future generations.

Queer as Folk was a watershed moment that changed how society viewed homosexuality forever and gave young people such as myself the confidence to shake off the shame and be proud of who we are. Let’s share that with the next generation.

Source: By Matthew Jenkin for www.inews.co.uk