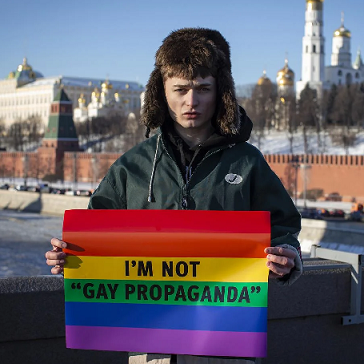 The network works to promote and protect the rights of lesbian, gay, bisexual, and transgender people in Russia. During Chechnya’s horrific anti-gay purge in 2017, the network led efforts to stop abuses and evacuate survivors.

According to the Press Service for St. Petersburg Courts, the ministry’s lawsuit argues that “all the activities of Sphere run contrary to the state policy designed to preserve, expand and develop [the country’s] human capital.” The ministry also accuses Sphere of spreading “LGBT views” and working with people under the age of 18, aspiring, among other things, to “change Russian federal legislation regarding the LGBT movement” – in other words, the discriminatory “gay propaganda” law. The suit asserts that if the work of a non-profit organization is out of sync with “fundamental family values enshrined in the Russian constitution” it represents “a threat to public order and the rule of law.”

Sphere Foundation was founded in 2011 by Russian LGBT rights activist, Igor Kochetkov. In 2016, authorities designated Sphere Foundation a “foreign agent.” In 2021, Russian LGBT Network and Kochetkov personally were also slapped with the toxic “foreign agent” designation. At around that time, state-sponsored media organized a vicious smear campaign against the network and Kochetkov.

PrevPreviousA tiny tooth unearthed from a French cave is upending what we know about early humans
NextMt. Everest’s highest glacier lost 2,000 years worth of ice since the 1990sNext