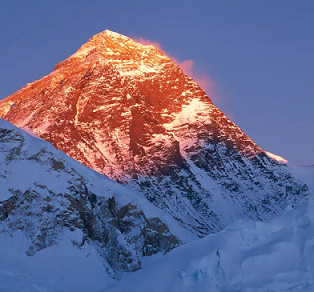 Even the world’s tallest mountain is not safe from climate change.

Even the glaciers on Mount Everest are not safe from climate change, new research suggests.

In a record-setting study, a team of scientists scaled the world’s highest peak to monitor the mountain’s highest-altitude glacier — the South Col Glacier, standing nearly 26,000 feet (8,000 meters) above sea level — for signs of climate-related ice loss. After installing the two highest weather stations on Earth and collecting the world’s highest ice core from the glacier, the team found that South Col is losing ice roughly 80 times faster than it took for the ice to accumulate on the glacier’s surface, they reported Feb. 3 in the journal npj Climate and Atmospheric Science.

The team’s core analysis showed that ice that took 2,000 years to form on the glacier has completely melted away since the 1990s, and that the glacier is currently losing several decades worth of ice accumulation every year.

“[This study] answers one of the big questions posed by our [expedition] — whether the highest glaciers on the planet are impacted by human-source climate change,” study co-author Paul Mayewski, a glaciologist at the University of Maine and director of the University’s Climate Change Institute, said in a statement. “The answer is a resounding yes, and very significantly since the late 1990s.”

The glacier’s rapid decline could have serious impacts on the mountain, and those who live near it. The melt may result in more avalanches on Everest, or expose more bedrock that makes the terrain more treacherous for climbers, the study authors found.