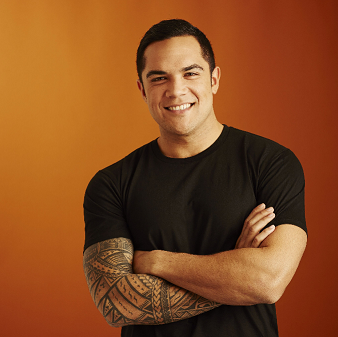 Mysterious Ways tells the story of a vicar who decides to have a wedding with his Samoan boyfriend, Jason. A church marriage for gay Anglicans is prohibited. God is forced to step in.

Mysterious Ways is a timely exploration of issues around faith for gay people both here in New Zealand and around the world. It’s a side of the rainbow community not often explored on the screen and we are thrilled to be attracting great talent to tell the story.

Auckland singer Nick Afoa, who played Simba for five years in the London West End theatre production of The Lion King, has been cast as Jason.Nick, who is of Samoan and Croatian heritage says: “I’m excited about tackling my first dramatic role. Screen acting is something I’ve wanted to explore for some time. The film bravely confronts issues around sexuality and religion. I’m looking forward to exploring the challenge of how we overcome these.”

British actor Richard Short is to play the role of the vicar. Richard recently wrapped production on Joel Coen’s The Tragedy of Macbeth (2021), as well as Jack Ryan: Season 3 (2022) for Amazon Prime.

The other key role in the film, Billy, is still to be cast. The character is Jason’s gender-fluid nephew who arrives in town insisting “they are an angel”. The Producers are looking for actors of Samoan heritage who can play 18 – 22 years old. The role is flamboyant with attitude and requires a believable drag performance. Anyone interested should contact the producer ngaire@sunpix.co.nz

Director Paul Oremland, (100 Men: Like it Is) has been at the forefront of exploring the LGTBQ+ experience in film & television for many years. He comments, “Most religions still see being gay as sinful. This does huge harm to millions of people in terms of self-esteem, family rejection, and legitimising hatred. A love story where God is on our side is a powerful statement that is needed now more than ever.”