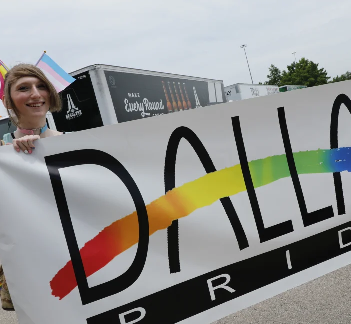 Themed as “Live Out Proud,” the North Texas LGBTQ celebration is set for June 4-5

The annual Pride celebration is a weekend-long event honoring the LGBTQ+ community and allies in North Texas. This year’s theme is “Live Out Proud.”

The festivities are set to begin Saturday, June 4 in Fair Park with the Dallas Pride Music Festival. The family-friendly event will feature a variety of musical and dance performances on both the outdoor main stage and on an indoor venue. The festival will also feature Teen Pride, which hosts a safe environment for LGBTQ+ youth ages 13 to 19. More than 200 vendors will also be at the event.

The annual Alan Ross Texas Freedom Parade will be held on Sunday, June 5 from 2 p.m. to 4:30 p.m. The parade, previously held in Dallas’ historic Oak Lawn district, will encircle the fairgrounds with floats, performers and groups of all backgrounds expressing their support for the LGBTQ+ community. The parade is named after Alan Ross, a long-time executive director of Dallas Pride.

The parade returns after a two-year hiatus due to the ongoing COVID-19 pandemic. Officials canceled the 2020 Pride and hosted a scaled-back version in 2021, with no parade.