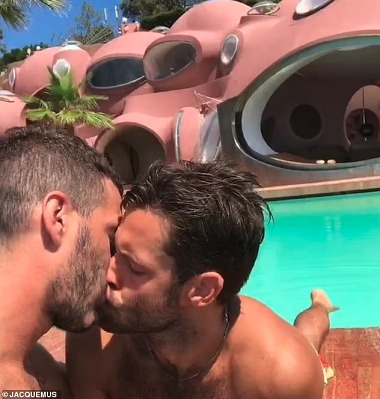 When French fashion designer, Simon Porte Jacquemus, shared a photo [above] of himself kissing his husband on Monday, he probably thought it would be little more than a sweet Valentine’s gesture.

Some of the comments it provoked shocked him.

Simon’s label, Jacquemus, is known for its clothing, bags, earrings and sunglasses. It takes a pro-LGBTQ stance and has used same-sex couples in its marketing campaign.

The photo shows Simon kissing his husband Marco Maestri beside a swimming pool. Posted to the label’s official Instagram on Monday (with its 4.2million followers), it’s prompted over half a million likes.

However, many of the initial commentators posted vomiting emojis, prompting Simon Porte Jacquemus to post a follow-up response. He took a screenshot of one person saying she’d previously been looking forward to buying one of his bags, but the photo made her feel sick.