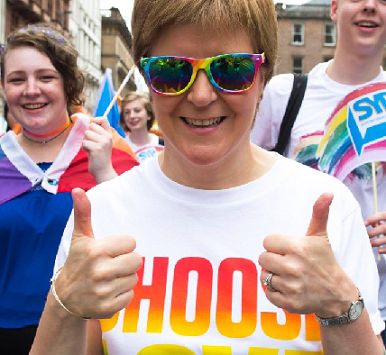 Every party leader at Holyrood has spoken out in support of LGBT Youth Scotland’s annual Purple Friday campaign, asking people to show their support for LGBT equality.

First Minister Nicola Sturgeon has been joined by cross-party leaders in calling attention to the importance of the Purple Friday campaign.

Purple Friday takes place on the last Friday of February each year, marking the end of LGBT History Month.

The name comes from the purple ‘spirit’ stripe in the LGBT Pride flag, and celebrates the spirit of the LGBT community and their allies.

Nicola Sturgeon said: “As the First Minister, I am delighted to be supporting LGBT Youth Scotland‘s Purple Friday because I want all of Scotland’s young people to know that they live in a country where their government and their parliament support them, value them, and stand with them – for equality and against discrimination or bigotry of any kind.

“Purple Friday is a wonderful opportunity for all of us to celebrate the progress that has been made on LGBTI rights in Scotland, but it’s also a chance to remind ourselves of the work that we can all do to make sure that homophobia, biphobia and transphobia truly become remnants of the past.

“LGBT Youth Scotland’s vision is to make Scotland the best place in the world for lesbian, gay, bisexual, trans and intersex young people to grow up. I share that vision and my government will continue to do everything we can to make that a reality.”

The day comes after a motion on Celebrating LGBT History Month (February), put forward by SNP MSP Karen Adam, was debated in the Scottish Parliament on Wednesday evening.

During this debate, cross-party support was shown for reforming the 2004 Gender Recognition Act.

It comes as a bill to reform the act is to be brought forward to Parliament next week by Social Justice Cabinet Secretary Shona Robison.

Despite the reforms seeing an intense debate arise in Scotland, SNP’s Christina Mckelvie said: “It’s vital work together to set a tone for respectful discussion.”