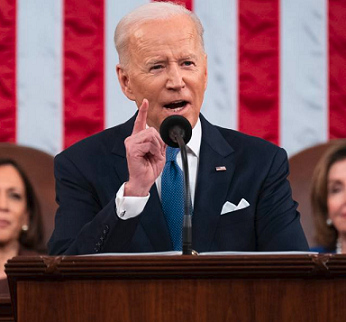 President Joe Biden vowed in his State of the Union address to fight the “onslaught” of anti-trans bills and restated his commitment to the Equality Act.

Speaking before a joint session of Congress on Tuesday (1 March), Biden spoke about several issues facing the country including the fall out of the COVID-19 pandemic and Russia’s war on Ukraine.

He also addressed key issues facing the LGBT+ community and called on lawmakers to “finally get the bipartisan Equality Act to my desk”.

The proposed legislation would expand the 1964 Civil Rights Act to include protections for LGBT+ Americans against discrimination. Passing the act was one of Biden’s campaign promises, and he vowed to make it law within his first 100 days in office.

While the bill passed through the House last year, the Equality Act has stalled in the US Senate where it has faced an uphill battle to receive a majority vote.

Biden said it was important for the Senate to pass the Equality Act and get it onto his desk as quickly given the “onslaught” of bills directly targeting the trans youth and their families. He promised to keep fighting on behalf of the trans community.

“The onslaught of state laws targeting transgender Americans and their families is wrong,” Biden declared. “As I said last year, especially to our younger transgender Americans, I will always have your back as your president, so you can be yourself and reach your god-given potential.”

A record-number of anti-LGBT+ bills were debated by state legislatures across the country and signed into law last year. 2021 was also the deadliest year on record for the trans community with at least 56 trans, non-binary or gender non-conforming people being murdered.

It would seem that 2022 is shaping up to break last year’s record as at least 160 anti-LGBT+ bills are pending in state legislatures, according to the Human Rights Campaign (HRC).

Sarah Kate Ellis, CEO and president of GLAAD, said Joe Biden’s State of the Union address was a “bold and unequivocal message of support” for trans and all LGBT+ Americans.

While Biden has “delivered on commitments” to queer people in the US, Ellis called on “every lawmaker at every level of government” to “commit to do the same”.

“The state of our union is only as strong as our action and commitment to ensure no marginalised person is left behind,” Ellis said. “LGBTQ voters are more motivated than ever to hold elected officials accountable in the midterms.”