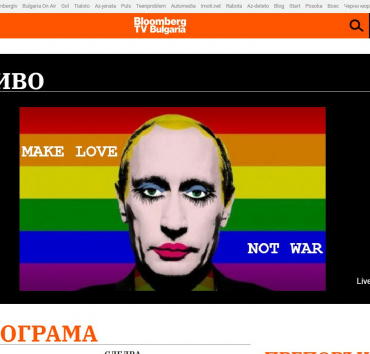 The online broadcast of several TV stations was hacked last night, and instead of airing them, popular caricatures of Russian President Vladimir Putin were broadcast on the websites.

It is a heavily made-up version of the traditional rainbow-colored flag – a symbol of LGBT + people – created in 2013 as a mockery of Russia’s homophobic policies and known as “Gay Clown Putin”. The words “Make love, not war” have been added to a familiar caricature.

The streams of Nova TV, the Bulgarian National Television, Bloomberg, Bulgaria On Air were changed.

A little later in the evening, Bloomberg and BGonAir continued to broadcast the caricature, and Nova TV and BNT had simply stopped the option of online streaming on their air. Nova and BNT have not resumed their broadcasting until this morning.