Will Russia bring its war on LGBTQ people to Ukraine? 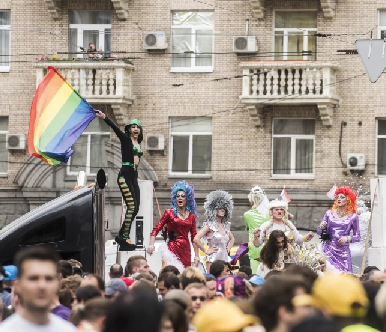 Zi Faámelu wants to escape the war in Ukraine, but her identity will not let her.

The 31-year-old singer, who is transgender, has a passport that says she is male, the sex assigned to her at birth, and Ukraine has prohibited men of fighting age from leaving the country.

That paradox has left Faámelu hunkered inside her Kyiv apartment as missiles soar all around her. She is considering following other transgender women who have crossed into Poland illegally through the woods in the week since Russia invaded.

“Already we were fighting for our lives,” she said. “And now we’re actually in war.”

Faámelu is anxious to leave now. She knows that under a Russian occupation, life could deteriorate quickly for LGBTQ people like her.

“It is a very bleak situation for trans people in Ukraine,” Faámelu said. “But in Russia, it’s even worse.”

Over the last two decades, Russian President Vladimir Putin has waged an all-out assault on the LGBTQ community, framing it as part of a larger campaign to protect Russia’s “traditional culture” from what he describes as an onslaught of modern values promoted by the West.

Putin has called gender fluidity “a crime against humanity,” and equated homosexuality with pedophilia.

A “gay propaganda” law passed in Russia in 2013 made it illegal to promote gay rights and has been used to jail activists and shut down LGBTQ support groups. And during a series of anti-gay purges in Russia’s Muslim-majority Chechen Republic, in which officials kidnapped, tortured and in some cases killed men suspected of having sex with other men, the Kremlin turned a blind eye.

At the same time, life for LGBTQ people in Ukraine has slowly been improving.