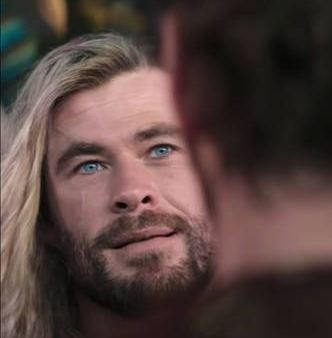 Is Thor bisexual? Marvel fans are living for the Thor and Peter Quill scene in new Love and Thunder teaser trailer.

At long last, the trailer for Thor: Love and Thunder has officially arrived and fans are already losing it over a couple of queer moments that have just been teased.

The trailer for the fourth Thor film sees Chris Hemsworth‘s Thor on a journey of self-discovery in his post-Endgame era. Joined by the Guardians of the Galaxy, Thor: Love and Thunder is set to also see King Valkyrie of New Asgard, Jane Foster as Mighty Thor and quite a lot of romance, as director Taiki Waititi has revealed.

It was already previously confirmed by Tessa Thompson that Valkyrie’s canon bisexuality would finally be shown in Love and Thunder, with the superhero “finding her queen”. (Scenes confirming Valkyrie’s sexuality ended up being cut out of Thor: Ragnarok.)

Now, it looks like the movie might be even more queer than fans thought it would be, thanks to a hilarious scene involving Thor and Star-Lord.