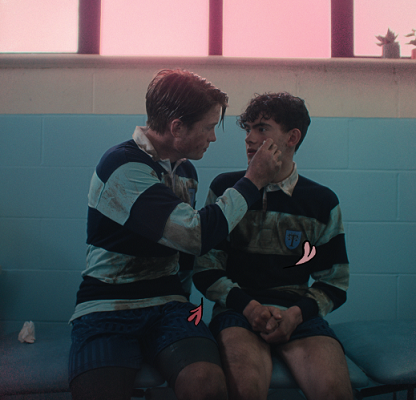 At first glance, Alice Oseman’s beautifully heartwarming Heartstopper which launches today on Netflix, based on her hit graphic novels, feels like a throwback to much-loved 90s British films about gay teens like Beautiful Thing and Get Real.

Although this series does share much of the feel-good quality of those movies and a similar focus on a young queer romance in an unaccepting environment, Heartstopper brings the boy meets boy narrative into the present day and expands it to include every LGBTQ letter without it ever feeling like box ticking.

As the series opens, we meet 14-year-old Charlie Spring (Joe Locke), who is into video games, drumming, and movie nights with his pals; who happens to be gay. He’s out at his all-boys grammar school, Truham, but Ben Hope (Sebastian Croft), a boy in the year above, isn’t. Ben texts Charlie on a whim to meet up for furtive snogs, then pretends they’ve never met when he passes him in the school corridors. The adorable and geeky Charlie, played with the perfect mix of sensitivity, vulnerability and playful charm by Locke, deserves so much more. Might confident and popular rugby lad Nick Nelson (a brilliant Kit Connor, who played a young Elton in Rocketman) be the one to give it to him? Charlie’s bffs—”token straight friend” Tao (a goofily charismastic William Gao), bookworm Isaac (an endearingly genial Tobie Donovan), and arty Elle (a captivating Yasmin Finney) who transferred to the neighbouring girls school, Higgs, after suffering transphobic bullying at Truham last year—all assume that Nick is straight and that Charlie falling hard for him will only end in tears. It’s a good reminder not to make assumptions about people’s sexuality or gender identity, let them be the one to let you know who they are, if they chose to.