Trust in government has never been lower 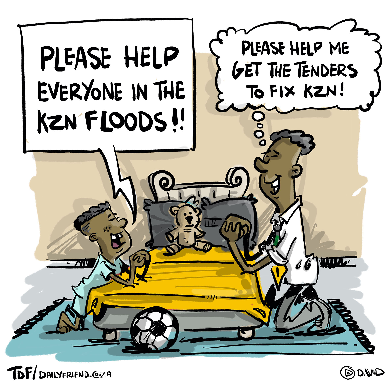 KwaZulu-Natal is teaching its residents, and the country, that government cannot be relied upon, and true help comes from the private sector.

Nothing demonstrated that better than the tragic floods in KwaZulu-Natal (KZN) this month.

While the people were thirsty, he shamelessly claimed a water tanker for himself. Then his office lied about it, saying that the video footage was doctored. Then it lied again, saying that it was merely on its way to deliver water elsewhere.

Finally, he was forced to say sorry, much in the way a teenage bully is made to say sorry. He didn’t mean it, and sorry doesn’t cut it.

One of the excuses he concocted after the fact stuck, and apparently calmed outraged residents.

One can only agree with EFF leader Julius Malema, however, when he told the media: ‘It was not for the first time. We saw it during Covid-19. It is not only Sihle [Zikalala]. They all do that. The call for him to step down is an honourable thing. When a national disaster has been declared, someone abusing powers must step down. Sihle is a failure and a thief. He steals our people’s water.’

Stealing relief money, diverting material aid, and failing to perform basic duties are not aberrations in ANC governments that merely require vigilant oversight and prosecution when they happen. They are how government operates. They are business as usual. They occur openly, without shame. They are expected.

‘As many people from many corners of our society rush to help the victims of the immense and horrifying flooding in KwaZulu-Natal, the government has promised to help the province and to make financial resources available,’ he wrote. ‘Instead of gratitude, they were met with an overwhelming amount of cynicism. It turns out that most people believe this money will simply be stolen.’

Even the Treasury, he added, has proposed appointing an independent agency to manage relief funds, in a tacit admission that it, too, believes the relief funds will otherwise be embezzled.

Grootes warns of the implications of this public distrust for both the ANC’s election hopes and for the rule of law more generally.

He does, however, believe that distrust in government is not a natural condition, and that trust can be restored, although he doesn’t elaborate on how exactly an ANC government would go about doing that.

A day later, he penned another piece, describing as ‘a stunning reversal’ the observation that ‘the ANC [is] now guilty until proven innocent’.

In it, he appears to relieve the ANC of responsibility over the KZN floods: ‘This would not be the first time a political party in government has been blamed for a natural disaster. As we have already seen during the pandemic, our government and others have been blamed for events beyond their control. In some cases, this may well lead to governments being voted out of power, even if they did nothing wrong.’

The ANC did nothing wrong. Right…