UN Chief Guterres to Meet with Putin on Ukraine War 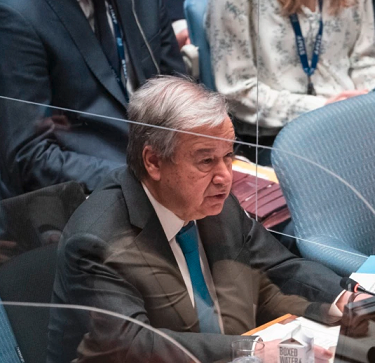 U.N. Secretary-General Antonio Guterres is headed to Moscow for a meeting Tuesday with Russian President Vladimir Putin in a renewed bid to try to get him to agree to a pause or end to his two-month assault on Ukraine.

Guterres’ spokesperson said the U.N. chief is later going to the Ukrainian capital of Kyiv on Thursday to meet with President Volodymyr Zelenskyy, because Guterres feels there is a “concrete opportunity” for progress.

En route to Moscow, Guterres met Monday in Ankara with Turkish President Recep Tayyip Erdogan, who has attempted, but failed so far, to mediate an end to the fighting between Turkey’s two maritime neighbors.

“You can see that even the willingness of the parties to meet with him, to discuss things with him, is an opening,” Guterres spokesperson Farhan Haq told reporters. “We will see what we can do, whether we can get a concrete improvement in the humanitarian situation. Whether we can get the fighting to stop for any period of time.”

Guterres has made repeated calls for a humanitarian cease-fire or a brief pause in fighting but has been unsuccessful.

Haq said he didn’t want to “oversell the possibility” that either of these could happen, cautioning that diplomacy is neither quick nor a magic wand. But he said Guterres is willing to take a chance to try to improve the situation.

“Because ultimately, if we can move ahead, even in small way, it will mean a tremendous amount to tens, even hundreds of thousands of people,” Haq said.

But Russia’s deputy U.N. ambassador said Monday that a humanitarian cease-fire is unnecessary.

“We don’t think that a cease-fire is a good option right now, because the only advantage it will give — it will give possibility for Ukrainian forces to regroup and to stage more provocations like Bucha,” Ambassador Dmitry Polyansky told reporters, referring to the Ukrainian town where Russian soldiers are accused of committing atrocities.