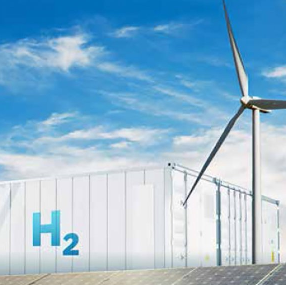 Hard-to-abate carbon emissions-intensive sectors – such as heavy-duty transport, aviation, maritime and heavy industries – may be able to reduce their emissions through the use of green hydrogen produced at a deep-water harbour facility in Boegoebaai, 60 km north of Port Nolloth.

The Boegoebaai green hydrogen development has been designated a Strategic Integrated Project in the South African National Development Plan and is located in the Namakwa Special Economic Zone (SEZ).

Speaking during a stakeholder engagement meeting in Port Nolloth on January 17, Minister in the Presidency Mondli Gungubele said such hard-to-abate industries cannot be decarbonised through renewable energy and electrification or through renewable energy and battery storage and that green hydrogen was “the best, long-term opportunity” to decarbonise such sectors as it produces zero harmful emissions.

Integrated chemicals and energy company Sasol signed a memorandum of agreement with the Northern Cape Economic Development, Trade and Promotion Agency to lead a 24-month feasibility study to explore the potential of Boegoebaai as an export hub for green hydrogen and ammonia.

Currently, Sasol is a major grey hydrogen (hydrogen made from natural gas) manufacturer, producing about 2.4-million tonnes a year for the domestic market.

The production of green hydrogen, however, provides Sasol with an opportunity to leverage its expertise to enter a new market through greenfield facilities like the planned Boegoebaai Green Hydrogen SEZ, said Gungubele.

At the same time, the Department of Trade, Industry and Competition is developing a hydrogen commercialisation strategy, and the Northern Cape and Gauteng provincial governments are developing provincial green hydrogen strategies focused on exports and domestic decarbonisation, respectively.

South Africa has a number of strategic advantages which could make it a globally competitive green hydrogen production area, said Gungubele.

These advantages include a “superior endowment of both onshore wind and solar, [with] renewable energy [being] the largest cost component in the production of green hydrogen”, he pointed out.