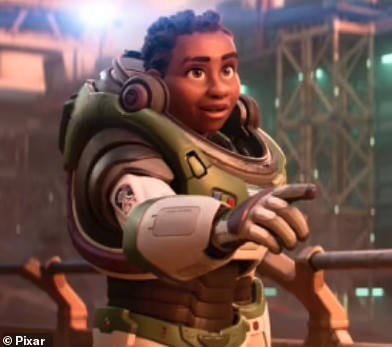 By Alyssa Guzman For Dailymail.Com

Disney has restored a gay kiss scene in its new movie Lightyear after a furious backlash from staff, as the firm continues to tussle with Florida over Governor Ron DeSantis’s so-called Don’t Say Gay bill.

The kiss happens between Buzz Lightyear’s friend Alisha Hawthorne (Uzo Aduba) and another female character within the first 30 minutes of the film, which was shown to audiences at CinemaCon on Wednesday.

They subsequently confirmed that the smooch had been restored.

Hawthorne reportedly meets her love interest after her and Buzz land on a strange planet and later alludes to her getting married to her. She reportedly can be heard saying: ‘It’s funny, I wouldn’t have met her if we hadn’t been stranded,’ according to USA Today.

The kiss was previous removed from the film before being reinstated after workers at Pixar Studios – which is owned by Disney – sent a letter to Disney CEO Bob Chapek, accusing the company of hiding same-sex affection.

‘Nearly every moment of overtly gay affection is cut at Disney’s behest, regardless of when there is protest from both the creative teams and executive leadership at Pixar. Even if creating LGBTQIA+ content was the answer to fixing the discriminatory legislation in the world, we are being barred from creating it,’ Pixar employees wrote in a March letter to the company.

In addition, at least four recent feature films were altered to appease the views of leadership in China, Russia and the Middle East.

Sources close to the production told Variety that while Hawthorne’s relationship was never questioned, studio execs opted to axe the kiss in an apparent move to avoid controversy.