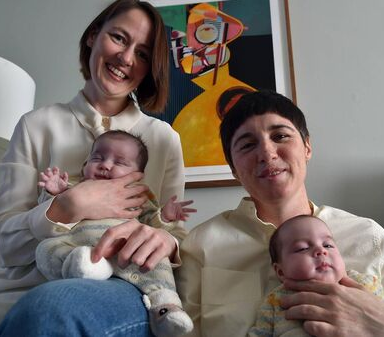 Shifts in attitudes and improvements in fertility treatment have opened up the possibility of having children to more people. Three couples talk about their long journey to parenthood.

Katie Guinnane and Rosy Kennedy who are parents to 12-week-old twins Berry and Rudy pictured at home in Galway city. Photo: Ray Ryan

What makes a family? Only a generation ago, Irish families mostly consisted of married men and women and their children. Single parents were shunned. Same-sex couples weren’t considered candidates for parenthood. And those who struggled to conceive often did so in shame and silence.

While the traditional nuclear family is still the norm, modern Irish families are becoming more diverse. The 2016 census showed that of the 862,721 families with children; 568,317 were married parents; 75,587 were cohabiting couples; 218,817 were single parents; and 591 were same-sex couples.

Jane Gray is a sociology professor at NUI Maynooth (NUIM) and co-author of Family Rhythms: The Changing Textures of Family Life in Ireland, a book that charts the evolution of Irish families from the early 20th century to the current day.

She believes that shifts in attitudes and improvements in fertility treatment have driven many of the changes. Technology has opened up the possibility of parenthood to more people, says Gray. “Our families have changed accordingly and become much more flexible as a result.

“With new fertility technologies, blended families, and step-families, family has become something that can be created rather than something that is given by law and custom. It’s about the relationships between people.”

The shape-shifting nature of the family proves to Gray how resilient it is as a social structure. “Despite all the changes in society over the years, the importance of family remains,” she says. “It’s how many of us still choose to live. It may not always look the way it did generations ago, but we have adapted our families in keeping with the realities of modern life.”

Here, three couples tell us about their modern non-traditional families.