Zelenskyy responds to Lavrov: Moscow has forgotten all the lessons of World War II 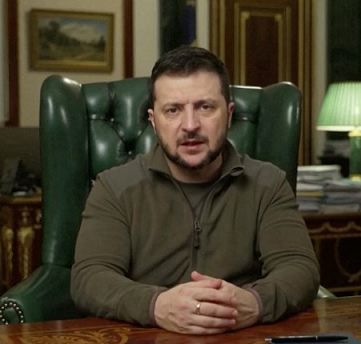 In an interview with an Italian news channel, Foreign Minister Lavrov referred to the fact that Ukraine’s President is Jewish and said, “In my opinion, Hitler also had Jewish origins, so it doesn’t mean absolutely anything. For some time we have heard from the Jewish people that the biggest antisemites were Jewish.”

Zelenskyy said in response that Lavrov’s comments show that Moscow “has forgotten all the lessons of World War II or perhaps never learned them.”

“I have no words…No one has heard any denial or any justification from Moscow. All we have from there is silence…. this means that the Russian leadership has forgotten all the lessons of World War II,” he said in his nightly video message.

“Or perhaps they have never learned those lessons,” he added.

Ukrainian Foreign Minister Dmytro Kuleba blasted Lavrov as well, writing on Twitter, “FM Lavrov could not help hiding the deeply-rooted antisemitism of the Russian elites. His heinous remarks are offensive to President Zelenskyy, Ukraine, Israel, and the Jewish people.”

“More broadly, they demonstrate that today’s Russia is full of hatred towards other nations,” he added.

Earlier on Monday, the Israeli Foreign Ministry announced that it had summoned Russian Ambassador Anatoly Viktorov for “clarification” in response to Lavrov’s comments.

Prime Minister Naftali Bennett chided Lavrov, calling his comparison of Russia’s invasion of the Ukraine to the war against Nazi Germany “untrue”.

Following more strident condemnations by other Israeli leaders, Bennett did not call Lavrov’s comments racist or anti-Semitic, choosing instead a more restrained response.

“I view with utmost severity the Russian Foreign Minister’s statement,” Bennett said Monday afternoon. “His words are untrue and their intentions are wrong. The goal of such lies is to accuse the Jews themselves of the most awful crimes in history, which were perpetrated against them, and thereby absolve Israel’s enemies of responsibility.”

“I join Israeli Prime Minister Bennett and Foreign Minister Lapid in deploring Foreign Minister Lavrov’s unfortunate comments as being beyond any legitimate and permissible rhetoric. Comparing any Jew, let alone Ukrainian President Zelenskyy, to Hitler is beyond the pale, and accusing Jews of antisemitism feeds into the agendas of the worst antisemites and neo-Nazis. I call on Foreign Minister Lavrov to publicly retract these comments to avoid pouring further gasoline on an already surging global antisemitic fire,” he said.