A simulation of a nuclear attack appeared on a popular Russian show, in which a graphic showing how long it would take for a rocket fired from Kaliningrad in the Baltic Sea to reach major capitals in Europe. 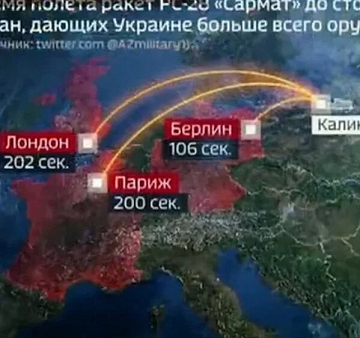 According to the displayed graphic, it would take 106 seconds for a Russian nuclear warhead to reach Berlin, 200 seconds to Paris and 202 seconds to London!

Chairman of the nationalist Rodina party, Alexei Zuravlyov, said that Britain would no longer exist in such a situation.

State Duma deputy Yevgeny Popov from the United Russia party argued that Britain also has nuclear weapons, and if a Sarmat missile is used, “no one will survive” in this war, “no one will be [left] on the planet.”

The move follows Russian television following reports that Vladimir Putin could use the May 9 Victory Day parade to declare a full-scale war on Ukraine.

In response to the western support of Ukraine, Putin ordered the military to test-fire its Sarmat missiles, which are also known as Satan II.

According to the Daily Mail, last week Putin bragged that his country’s hypersonic missiles could “break through all modern defences” and could be ready to strike the UK “by autumn”.

The remarks were made on one of Russia’s most watched TV programmes, while hosts and guests discussed comments made by James Heappey, the UK Armed Forces Minister, in which he said strikes by Ukraine on Russian soil would be “legitimate” if they disrupted supply lines.

The show has been hosted by wife and husband Olga Skabeyeva and Evgeny Popov, who are married with each other, since September 2016, and is one of Russia’s most watched programmes.

On the show a furious Zhuravlyov said: “One Sarmat [missile] and that’s it – the British Isles are no more.”

When Skabeyeva cautioned “but we are serious people”, the politician hit back “and I am saying that seriously.”

“They’re accusing us of state terrorism”, he fumed, prompting Popov to say “the UK also has nuclear weapons”.

Zhuravlyov doubled down, declaring “we’ll start with a blank slate”, before saying the missiles “can’t be intercepted”.

“Their abilities are limited. They say they can shoot it down, we’ll see about that,” he added.