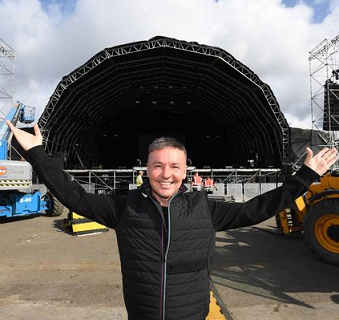 Lawrence Barton is expecting thousands of visitors to Birmingham’s Gay Village during the Games.

Birmingham’s Gay Village will be a ‘place of welcome for everyone’ during the Commonwealth Games, Pride chief Lawrence Barton said today. Mr Barton – who chairs Southside BID – said the LGBTQ+ community would welcome the world ‘with open arms’ despite the harsh anti-LGBTQ+ laws which still exist in many Commonwealth countries.

Over half of Commonwealth countries criminalise homosexuality – with some nations imposing the death penalty as a punishment for being gay. Despite these concerns, Lawrence Barton said he was ‘excited’ to welcome visitors from across the globe to the Gay Village during the 2022 Games.

“We will very proudly be showing off our community and district to our new visitors from across the world and we’re very excited,” he said. “People from other countries where there are harsh anti-LGBTQ+ laws in place will find a welcoming space here where they can enjoy freedoms they don’t have at home.

“We hope they can then take that positive messaging and equality back with them after the Games.”