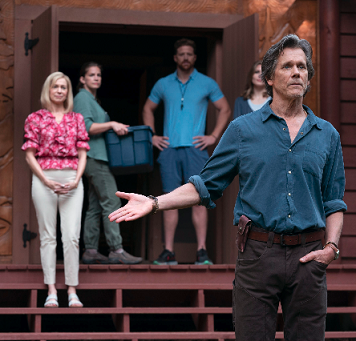 In They/Them, Kevin Bacon and Carrie Preston play a couple who runs Whistler Camp, a conversion therapy camp for LGBTQ teens, where a killer starts picking off victims.

Kevin Bacon is returning to his slasher genre roots.

The Golden Globe winner, 63, stars in Peacock and Blumhouse’s upcoming LGBTQ horror film They/Them (pronounced “They Slash Them”), which boasts a “queer empowerment story” with some classic horror vibes, premiering Friday, Aug. 5 on the streaming platform.

The movie follows Bacon’s character as “several queer and trans campers join Whistler for a week of programming intended to ‘help them find a new sense of freedom.’ As the camp’s methods become increasingly more psychologically unsettling, the campers must work together to protect themselves. When a mysterious killer starts claiming victims, things get even more dangerous,” according to a synopsis from Peacock.

They/Them serves as the directorial debut for writer/director John Logan (Gladiator, The Aviator, Skyfall) who explained the film’s personal significance.

“They/Them has been germinating within me my whole life. I’ve loved horror movies as long as I can remember, I think because monsters represent ‘the other’ and as gay kid I felt a powerful sense of kinship with those characters who were different, outlawed, or forbidden,” said Logan.

“I wanted to make a movie that celebrates queerness, with characters that I never saw when I was growing up,” he continued. “When people walk away from the movie, I hope they’re going to remember the incredible love that these kids have for each other and how that love needs to be protected and celebrated.”